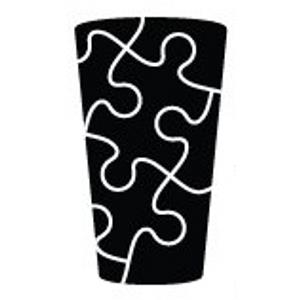 Imagine taking part in a pub quiz with your friends, but swap the questions for puzzles: word puzzles, picture puzzles, maybe codes, perhaps maths or logic puzzles. They might be mysterious at first, but you’ll enjoy figuring them out with your team. The atmosphere is deliberately friendly; hints are given out freely to make sure everybody has fun. This emphasis on “everyone gets as much help as they’d like” makes the event less competitive than you might think. This event exists, it’s called Puzzled Pint and it happens on the second Tuesday of every month in, among other places, London. Accordingly, tonight is Puzzled Pint night.

The event started in Portland, in the state of Oregon in the northwest of the USA, in July 2010. Fairly quickly, people got the idea that the same puzzles could be used in different cities; not much more effort, many more people get to enjoy them. In October 2012, it spread to Seattle. In November 2013, it took the giant leap to the UK and has been running every month in London ever since. This month is a particularly interesting one as the fun will spread to two more Stateside cities: giant Chicago and tiny Missoula. Missoula will be particularly interesting as, over time, it will show whether a Montana city of barely 110,000 people, even counting its suburbs, can support the event nearly as well as the other locations, each a metropolis of multiple millions.

Finding the event location is the first challenge; a puzzle is posted on Monday evening, whose solution will reveal the location in each city. You can find this month’s “location puzzle” here, and it’s a fun one. Again, hints are available if you need them!

The London event generally starts around 7pm. (That said, last month there were almost fifty attendees, in 12 teams, and it was something of a squeeze – so turn up early if you can.) The puzzles are free, the pints aren’t. You can listen to what a Puzzled Pint sounds like in this beautifully-made podcast if you want to hear how much fun people have.

This is quite a different sort of challenge to a locked room; however, it still might scratch your “solving puzzles in a team” itch. They’re all pencil-and-paper puzzles, but there aren’t the fun toys to play with that make locked rooms so cool. The best way to find out whether it’s your cup of tea is just to give it a try!