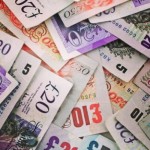 In the last week, a successful property speculator has been hiding envelopes with moderate quantities of cash around cities near the west coast of the United States, posting pictures of the locations and not-very-cryptic clues to their whereabouts to their Twitter account. There is something of a “pay it forward” motif, though of course this cannot be enforced. Apparently it has spawned imitators; most relevantly for us, Hidden Cash UK has made three drops in the North in two days.

There are definitely possibilities here. As there have been many imitators already, there’s no reason why there couldn’t be more to come: there’s got to be room for a Hidden Cash GB, a Hidden Cash Ireland, a Hidden Cash London and so on. Some would consider a couple of hundred pounds a very adequate investment for thousands, or tens of thousands, of involved followers within a couple of days. If someone were to distribute Hidden Cash coincidentally outside their exit game site, then perhaps the site could attract the attention of those looking for it who are likely to be favourably inclined, though possibly unimpressed by a lack of subtlety. (Hiding the cash inside an exit game and charging people to play it might well be considered a bit cheek, though you might still get away with it.)

This probably has the hallmarks of being a half-a-week’s wonder on Twitter in its current form, but if the mainstream media decide to run with it then perhaps there’s a few weeks, or a few months in it. (Maybe more.) This is far from original, of course; Tom Scott and Dan W. ran Advent Locker in December 2012, which is similar but used prizes in Amazon Lockers, and you know that this site will take any opportunity it gets to link to the wonderful story of the newspapers’ own Treasure Hunt Riots, a little over a century earlier. (Also a salutary reminder of the potential dangers of such things. Dan and Tom did nothing more ill-willed than having their Christmas Eve prize be a good old festive RickRoll, but not all patrons need be so benign.)

Treasure hunts themselves are far older; the parallels to geocaching are obvious, and that is so well-known that it need not be explained. Arguably Hidden Cash has a closer connection to its GPS-less, clue-heavier predecessor, letterboxing, which has been dated back to 1854.

There has to be something exciting and relevant to do while Hidden Cash is fresh in people’s minds, and that may not be for too long…