Exciting times! News has arrived of another forthcoming exit game to London, Escape Land. This one will be situated very near the Cambridge Heath train station – or, if the Underground is more convenient than the West Anglia railway, within a few minutes walk of Bethnal Green. The site is taking bookings now, with the first game available from Saturday 14th June. The site will open with one game, which is set to have a sixty-minute time limit and will host teams of three to five players. The biggest gimmick is that there is a gorgeous-looking steampunk theme. 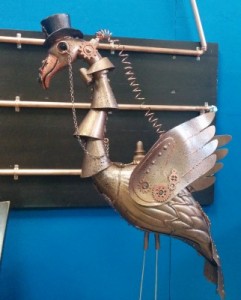 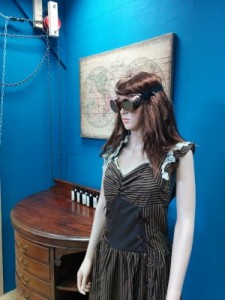 A little impudence has called in these two pictures of the goodies that are set to face you, and a little more reveals a teaser for the theme.

Would you want to live in a world where time travel is possible?

In the future, technology became so advanced that scientists found a way to open gates into different parts of the timeline. But after the first tests it quickly became visible that you can’t travel in time without consequences.

Every time someone did a trip through a time gate, catastrophic events occurred in the surrounding area. The bigger the group of travellers, the bigger the tragedy. It turned out even individual souls can’t play God and change their destinies in such extreme ways. If you don’t look after your body you get sick. If you are not willing to follow your given path, nature will find a way to show you that you were wrong.

After the first months the government had to set up emergency regulations. No one was allowed to travel in time anymore. They were monitoring everybody who had anything to do with current cutting edge technology. All the studies and information became classified. Former time travellers were hunted down. A small group of rebels managed to stay hidden in 1900. After years of hiding they tried to open a gate into 2014. It never turned out what their plan was. But this time gate happened to be two-sided.

When they appeared, a small group of people got sucked into the time tunnel and travelled back into the age of steampunk. You suddenly find yourself in the home of two strange scientists. They are telling you that you should not have seen their base and you probably have one hour left until the rest of their Illuminati arrives for their weekly meetings. One hour to escape from the age of steampunk. Good luck and have fun!

That’s distinctive, evocative and exciting; fingers crossed that the rest of the content can match up to what we know so far, and that the puzzles can match the standard of dressing. (Some of the photos of players are going to be priceless.) This looks like being a valuable addition to London’s exit game landscape and this site looks forward to reports after the game opens on Saturday week.