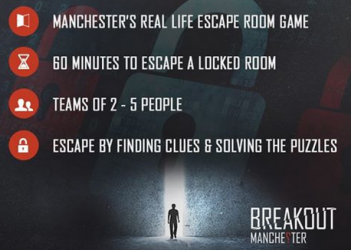 This site has previously discussed the Breakout Manchester exit game business, around two months old but already doing excellent business. It’s a joy to be able to feature an interview with Ed Roberts, the man behind the site. The questions asked by Exit Games are tagged with EG and Ed’s responses with ER below. The opinions are a little feisty in places; no bad thing at all, but be clear that they belong to Ed.

Thanks so much for that, Ed! Note also that last week, Breakout Manchester posted to their Facebook feed that:

Breakout Manchester is recruiting. We need game organisers, makers and technicians. Part time flexible hours available. Must have good customer service skills. If interested please send your CV to hello@breakoutmanchester.com and the days and hours that you are available to work.