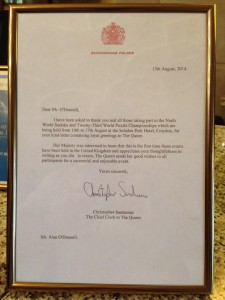 One of the star guest attractions at the World Puzzle Championship is the above letter, sent in response to a letter informing Her Royal Highness Queen Elizabeth II of the event’s existence. Probably most of the event attendees have their own photos of the framed letter; credit Akıl Oyunları for that particular photo, that does well at avoiding the glare of reflection from the frame. (Unusually for this web site, click on it for a closer look.)

Akıl Oyunları also takes the credit for recent photos of the World Puzzle Championship scoreboards after five rounds: the team scoreboard has the German team narrowly overtaking the Japanese team after round five (and the USA team being fought hard by the German B team) though there has been some nip-and-tuck in the battle between them, and the individual scoreboard shows Germany’s Ulrich Voigt starting to pull away from the field.

For further live updates, keep following Akıl Oyunları’s Facebook page and perhaps also the German-language “Live from London” thread on the Logic Masters Germany page. The Canadian puzzle team weblog is being frequently updated as well, as is Palmer Mebane‘s weblog. On Twitter, English-language discussion was tagged #worldsudoku for the world sudoku championship and is being tagged #worldpuzzle for the world puzzle championship. If you know of other sources, please post them in the comments below.

The in-person final of the World Puzzle Federation’s GP competition was last night. The “Live from London” thread referred to above had the play-by-play and the Japan Puzzle Federation have a photo of the scoreboard. It must have been great fun to watch the scoreboard be updated in real time, let alone watching the competitors solve the problems. Congratulations to Hideaki Jo and Kota Morinshi of Japan for overcoming their slight time penalty, arising from performance in the online rounds, to take first and second ahead of Germany’s Ulrich Voigt.

In exit game news too exciting to wait, Escape Quest is a site under construction, expected to open in November in Macclesfield, Cheshire. The site has a gorgeous little trailer video that’s rather fun. You can sign up in advance, with an opening discount promised, and a little impudence and investigation (for would you expect less?) reveals an address, so there can be a pin in the map. This site wishes Escape Quest well and looks forward to reading more from them!