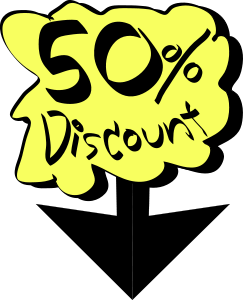 One of the best reasons to keep following this blog for news of new sites is that sites tend to be more likely to offer discounts immediately after they’ve opened than later on. (There is a school of thought that offering discounts too frequently will drive people to wait for the next discount to come along and delay their purchase; for instance, has anyone ever paid full price for a three-piece suite?) Here’s a quick run-through of the deals that this site could find that are still valid. (Ground rules: terms and conditions doubtless apply and this site takes no responsibility for deals that fall through for whatever reason. These are not exclusive in any shape or form.)

One hot new discount comes from Escape Glasgow, of the Dear Green Place, which is opening its first room either today or tomorrow. If you’re quick, there is a flash Wowcher deal active, but you need to book it by 23:59 this Friday night, so a little over two days away. Teams of 2-6 get to play for £24 rather than £60. Vouchers are only valid until 22nd November. (Supposedly 34 have gone already; it’s not clear if there’s a limit, but don’t hang around.)

Another new site, Escape Rooms of London, also have a deal going where a quick response is required. Until Sunday 24th, share a post they made on their Facebook on August 11th on your Facebook. If your share gets five “Like”s, take a screenshot and e-mail it to them for a 50% discount on your first game. Cunning plan! The post explains the details. (Edited to add: Additionally, Escape Rooms made a Groupon voucher available, and told this site about it before 10am one morning. When this site came to check out the details less than 12 hours later, the voucher was no longer available because all 100 vouchers had been bought. That’s fast. In fact, all 100 went within just four hours – but a few more are set to be released on each of the coming days, so look out and try to be in the right place at the right time.)

Bath Escape had a blog post last week relevant here; solve the riddle, e-mail the solution to them and follow them on social media for a 10% discount, refunded in cash in person. It’s not clear if there is a time limit for this offer.

It’s arguably a good sign that every other deal in last month’s Dealwatch seems to have expired or sold out and that the existing sites are selling out without offering discounts. You really do need to act quickly. Escap3d Dublin had a Groupon offer that started after the last Dealwatch and has already finished, which might point towards Dealwatch needing to become more frequent than monthly.

In the short term, or if you’re looking for deals outside the UK and Ireland, there are many reasons to commend the Intervirals weblog; Essa does a tremendous job at pointing out exit game special offers from around the world as they become available.