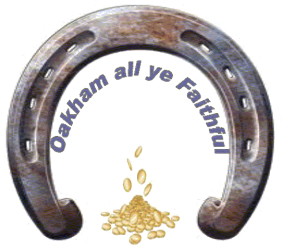 The above graphic is taken from the Armchair Treasure Hunt Club‘s web site, and this site very much hopes that they won’t mind its reproduction to promote their annual event – perhaps they might show a little Christmas spirit, in the spirit of the message central to the cartoon. (Hey, only four months and a day to go!)

The Armchair Treasure Hunt is a genre most famously exemplified by the 1979 book Masquerade, but people set new hunts every year. While none has caught the public attention in quite the same way, some are still high-concept and massive in scale; others are less ambitious and set for the entertainment of only a few dozen players. Some have clues to a physical prize to be recovered; others are purely virtual. The Armchair Treasure Hunt Club has a list of such hunts, and its members often host their own; the prizes might not be so massive, but you can rest assured that they have been composed with love by those very familiar with the genre, its common pitfalls and how to avoid them.

The club has an annual meeting which features an in-person one-day hunt. The invitation explains that Although we used to call them ‘meetings’ these events don’t have any formal ‘meeting’ part – they offer a chance to meet like-minded treasure hunters and swap ideas. But the heart of the events is a real outdoor hunt designed for teams of all ages. Members and non-members are equally welcome at these events. Accordingly, why not go along to the next one? It will happen on Saturday 13th September in Oakham here in the UK. Those who revel in minutiae of administrative subdivisions may know Oakham as the county town of the smallest historic county of England; to the rest of us, it’s in Leicestershire, in the East Midlands.

The event will start at 11am, your £22/player fee includes a carvery lunch and the whole enterprise is set to be done and dusted by 6 o’clock. To help set your expectations and decide whether the event is for you, the bottom of the invitations page has links to, near enough, twenty years’ worth of past hunts – plenty of evocative photos, many full descriptions of the hunts themselves. Stephen Miller of Pyro Puzzles writes that there can be expected to be teams wandering around Oakham before the hunt to familiarise themselves, then they’ll be given clues to get them going and exploring to find the answers. Then there’s usually a number of code breaking challenges which reveal cryptic clues to the location of the treasure, then it’s a mad dash to be the first with their hands on the prize. As the festivities start the night before, there may be some fuzzy heads in the morning, before the investigation and carvery lunch hopefully get people into gear for the afternoon’s hunt itself!

On a related topic, some reports are coming out from the International Puzzle Party in London at the start of the month: to name but four, Allard, Jerry, Kevin and Roxanne all convey senses of the fun they had. Allard and Roxanne also have gorgeous, must-read reports from Stephen Miller’s “Top Secret” in-person puzzle hunt from the start of the month, too. (This site also really enjoyed Allard mentioning that two teams of five IPP attendees also battled it out at HintHunt in London. Yep, there’s definitely a crossover interest between all the different puzzle hobbies!)

One of the highlights of the IPP is the Edward Hordern Puzzle Exchange, in which 100+ participants bring a copy of an unpublished mechanical puzzle for each other participant, and spend most of a day trying to ensure that they swap one-for-one with each other participant. (Then work out how they’re going to get 99 puzzles home, which sounds like an inside-out hip-hop song.)

Jerry specifies that contributions need not be the exchanger’s own design. He/she can commission or use someone else’s design (with permission of course). Out of the 99 puzzles that were exchanged at IPP34, almost 40 exchangers adopted somebody else’s design. (…) The exchanged puzzle must not have been previously in someone’s collection nor commercially available prior to the exchange. Another highlight is the Puzzle Party as such, surely the highest-end puzzle bring-and-buy sale in the world.

On the subject of rounding up recent events, last Friday saw the Mind Sports Olympiad‘s annual sudoku-and-Kenken competition, a 3½-hour paper with eight difficult examples of the two types to solve. Subject to confirmation, The Magpie‘s Mark Goodliffe may well have repeated his triumph in the contest from 2013. Next up: if you took part in the remote qualifying contest, which took place over 9th-13th June, perhaps you have been invited to the in-person finals of The Times Sudoku Championship, which happen on Saturday. Good luck if you have!