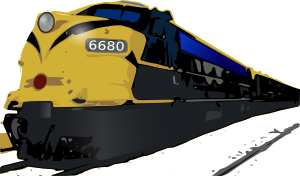 Doing a dangerous thing and thinking out aloud here…

The Prague Chess Society have a very cool event, called the Chess Train. It’s a four-night touring holiday, starting from Prague and taking a circular route around central Europe. There is a chess tournament held on the train over the course of the five days: rapid chess, 1-3 rounds per day. This year’s route is Prague (Czech Republic) – Vienna (Austria) – Budapest (Hungary) – Trencin (Slovakia) – Krakow (Poland) – Prague.

If that can happen for chess, there’s no reason – in theory – why it couldn’t happen for puzzles. Apart from the fact that it could be a great chance to take a tour in the company of scores of puzzle fans, there could well be puzzle contests filling up (at least parts of) the train journeys from location to location rather than chess matches. There could be events in the various cities overnight. If exit games are set up to deal with a great many teams at once, they might be part of the fun. The possibilities are very considerable.

The chess train was set up to feature up to a hundred entrants to the chess tournament, so that’s the order of magnitude that might be required to make a counterpart puzzle train happen. Could there be a hundred people willing to travel from around the world to make a similar thing happen for puzzles? Don’t know, but with – say – a year to think about it and a couple of years to make it happen: maybe, just maybe. (If somebody wants to take this idea and run with it, please go ahead!)

This is far from an original thought, of course, and if you’re so taken with the concept of competitive travelling then, happily, there are a couple of established ventures that already exist, on a somewhat grander scale. Both have several years’ history and this site isn’t familiar with anyone criticising either of them.

It’s hopefully not too unfamiliar a reference to suggest that there is something of a The Amazing Race vibe about Competitours, a 10-day more-challenge-y-than-puzzle-y event in 4/5 locations across Western Europe (where the 2014 event was priced at US$3375 per person, plus meals, incidentals and the cost of flying to the start). If you have a good US$25,000 per person, then there’s a 23-day 6-8-leg global rally called The Global Scavenger Hunt. Both are great to read about, and to dream.

Might a puzzle train holiday be more realistic and practicable? Perhaps.