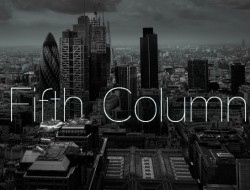 There’s a spectrum between story and game; if there’s some element of result, possibly a score, or at least some sort of deliberate demarcation between explicitly win-ish and lose-ish endings, then it’s more likely to be relevant here. If there’s overt mention of puzzles, again it’s locked-in like Flynn. Here are some events coming up that feel more on-topic than not. Again they’re pretty London-centric; sorry about that, but it’s just where things are happening. (There’s a new Knightmare Live tour coming up, playing nationally between Brighton and Aberdeen, but not so many people get to play per show.)

CoLab Theatre‘s Fifth Column describes itself as an “immersive gaming experience” and that teams will “Discover secret packages, decipher coded messages, track enemy spies and uncover the city’s covert treasures”. These verbs are very relevant to this site’s interest. After a short programme of preview shows, the show is being presented on Wednesdays (and some Tuesdays) to Saturdays at 7:45pm, plus Saturday matinees starting at 3pm until Saturday 15th November; teams of five are charged at £18.50/player. Early playings of the show have attracted reviews from the mainstream theatre review press, with less of a focus on the puzzle-solving activity than readers of this site would be likely to want. Nevertheless, sounds rather cool.

This site has previously covered the a door in a wall horror-themed production of A Stab in the Dark; it’s worth noting that the show is set to run from Friday 3rd October to Sunday 2nd November, and at this time only eight of the 36 scheduled shows in the run have any tickets left at all, which is surely a resounding vote of confidence in the show and the company behind it. If horror is your genre, best not hang around.

Next weekend sees the culmination of the Fun Palaces movement, celebrating the centenary of the birth of theatre director Joan Littlewood. She, with architect Cedric Price, conceived the Fun Palace as a temporary and movable home to the arts and sciences that would welcome all ages, using phrases like “university of the streets” and “laboratory of fun”. There will be well over a hundred such locally curated events, mostly taking place on the 4th and 5th of October. The most relevant-looking one appears to be a murder mystery trail at Birmingham’s Pen Museum; one other playable-looking item (of, quite possibly, many) is Das Spiel: Are You Part Of The Game at the Hammersmith Lyric, with a connection to illusions.

If you know of other relevant-looking events, please let this site know!