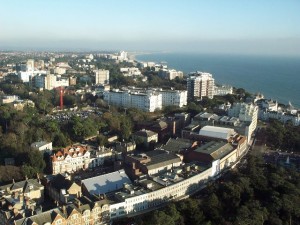 (Photo of Bournemouth town centre and East Cliff, resized from a file licensed under Creative Commons; mouseover for specifics.)

This site has a list of UK cities and towns where it expects to see escape games launched at some point down the line; occasionally this site performs a search engine check to see if there are any previously unknown web sites that describe themselves in one of the usual ways, alongside the names of our target locations. This approach brings up hits from time to time, most recently in the south coast resort of Bournemouth. A big Exit Games UK welcome, then, to Cyantist, by far the most turquoise game going. That’s a compliment; turquoise is a lovely colour.

The web site hints at a very chemical sort of atmosphere, bordering on alluding to the very cool Breaking Bad. The location is half a mile or so from the sea. It’s a sixty-minute game for teams of 2-5, with 3-4 recommended, and the theme is based around searching for an antidote. The site’s Facebook page suggests that the first games were played on September 12th. The operators go out of their way to please regarding availability, being willing to run games starting as early as midday or ending close to midnight, seven days a week.

The game costs between £30 for a team of two and £60 for a team of five, but there are various discounts available already: 20% off while an opening discount coupon is in operation, half off for anyone who has ever hosted a guest through Couchsurfing (an excellent way to pay something back to the movement) and an additional discount for someone who buys tickets for their friends. No need to look for vouchers with that line-up of deals is in place!

Definitely one to watch and this site looks forward to following it over time.