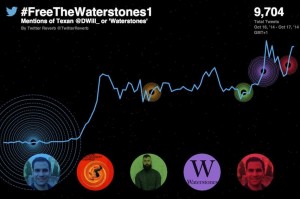 Last night, an American tourist managed to get himself trapped in the Trafalgar Square branch of Waterstones. He posted a photo, with the description “This is me locked inside a waterstones bookstore in London. I was upstairs for 15 minutes and came down to all the lights out and door locked. Been here over an hour now. Supposedly someone is on their way.”

A little later, he tweeted “Hi @Waterstones I’ve been locked inside of your Trafalgar Square bookstore for 2 hours now. Please let me out.” His Tweet has been favourited over nine and a half thousand times, and retweeted over fourteen thousand times. He called the police, eventually a keyholder was summoned and he was released from the bookshop. The story has been reported in over a hundred newspapers, news sites and so on, so it’s the sort of quirky story that has caught people’s attention.

So the publicity stunt waiting to happen: while he’s still in the country and used to being locked in unexpectedly, why hasn’t an exit game invited him to be a celebrity player? (…Or has it?) The story has probably a dozen hours or so more to run before it goes completely cold, so perhaps strike while the iron is hot!