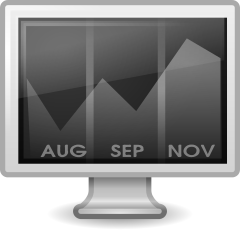 It’s not clear where the October data has gone on the above graph, but this site shows October the respect it deserves. This is the seventh instalment of an occasional feature to act as a status report on the exit games in the UK and Ireland. On its own it means little, but repeated sufficiently many times it could be the basis of a survey of growth over time.

The term opened should be understood to include “sold tickets”, even if it is unclear whether any of those tickets may have been redeemed for played games, and the definition of site should be understood to include outdoor sites and component parts of larger attractions that are played in the same way as conventional exit games. The new “abandoned before opening” category refers to Puzzlescape of Manchester, which never got beyond a rudimentary web site at a domain which has now expired.

This needs to be taken with a heavy pinch of salt. This site supports all the exit games that exist and will not make claims that any particular one is superior to any other particular one. Please note that the TripAdvisor rankings represent a wide variety of locations and cannot be directly compared against each other. In fact, it’s probably pushing it even to compare the TripAdvisor rankings of two exit game sites in the same city.

It’s worth celebrating that six exit games have got to number one in their respective cities, which is hugely impressive. Some sites have moved up, others have moved down; if anything, reviewers are seeming to be more exacting in their reviews and requiring more to award a 5/5 than they were even a few months ago, so sites that can make the final push to the very top slot are especially praiseworthy.

This month, this site makes an estimate with its usual level of confidence that the number of people who have played at least one exit game in the UK or Ireland by the end of October is now 89,000. Does this seem low considering the ongoing, continued expansion? Well, if someone plays more than one game at the same site, this figure still only counts them once, though that site would surely count them several times. As usual, this number is only really meaningful in context of this site’s previous estimates, none of which have ever been particularly confident.

The figure also reflects the state of play at the end of October 31st, with regard to Escape of Newcastle which opened today, November 1st. While there were three site openings in the UK in October – or, should we say, three successful site openings and sadly one abortive one – two of them were so late in the month that their effect will only really be felt in November and onwards. Escape Quest of Macclesfield will open mid-month, too, perhaps one or two other long-running slow burners and maybe we’ll be delighted to be caught by surprise by something completely unexpected.