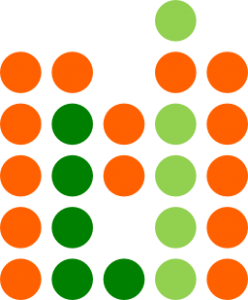 Logic Masters India is a web site that hosts interesting puzzle contests and sudoku contests. Many months see one of each, and there has never yet been a charge for participation. Some contests encourage you to print an examination paper out to find the puzzles, then solve it on that paper and type the answers into the web site; a few let you solve using an online interface. Some contests will give feedback straight away as to whether your submitted answers are correct (with incorrect attempts limiting your potential score!), others make you wait until the end of the contest’s time limit before telling you whether your answers were correct or not. The community has most of the world’s top competition solvers in, with contests frequently attracting 200 entrants or so; the site also holds contests to find India’s national teams for the annual World Puzzle and Sudoku Championships.

This weekend sees a contest called Sudoku Surprise, which features two examples in each of seven new forms of sudoku variants. It’s a 2½-hour test, set by David McNeill of Northern Ireland, and you can start at any point up to the end of Monday, UK time. The fourteen puzzles vary radically in difficulty; even relatively modest solvers stand a good chance at one of the puzzles of each of the seven types, whereas the other puzzle of each type is expected to be very challenging. Initial feedback suggests that this competition is rather a corker.

It’s also important to recognise David’s contribution to competitive UK puzzling; he was part of the UK World Puzzle Championship team in each of 2003 to 2006, the highest-placed UK finisher each time, with his best finish being 19th, a position that would not be bettered by a UK solver for eight years. He then concentrated on participating in the UK team for the then-new World Sudoku Championships in 2007 to 2011, again best-placed among the UK participants each year, with his sensational 4th-place global finish in 2007 a national record. He returned to competition at this year’s world championship, winning the title of World Senior Sudoku Champion as best-placed over-50 solver.

His day job is that of a senior university lecturer, with research interests at the forefront of the interface between chemistry and electronics. He’s also been as original and successful a puzzle creator as he has been a solver over the years, an enthusiastic devisor whose puzzles have brightened up many contests along the way. On top of that, he’s a lovely fella!