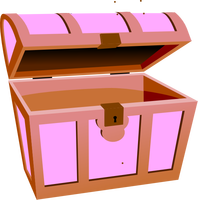 There are a number of very intriguing-looking puzzle hunt competitions of various scales either in progress or coming up soon. Will you break any of the metaphorical treasure chests to be found?

The @MrHydeAndSeek account on Twitter has a series of picture-driven treasure hunt competitions, just for fun. You can get a sense of the game’s conventions by looking over past hunts; in an example of excellent practice, each previous hunt is explained, with full descriptions of the precise subtleties in each of the clues. The clue-writing seems very precise and as imaginative as you would hope.

This site has written about this year’s Pablo’s Armchair Treasure Hunt previously, but more information has very recently been made available; specifically, the poster has been released, with further pointers towards a Hitchhiker’s Guide to the Galaxy theme. Plenty to start work on already: what looks like some braille, some binary, a DNA strand, several pictures and quite possibly some other encrypted information as well. The actual full body of the hunt is released on December 19th and you’ll have three and a half weeks to put your answer together.

If you’d like a hunt with a prize, and if you live in London, then perhaps Gold Hunt London might be for you. A specially-engraved gold bar currently valued at over £5,000 has been (or, perhaps, is about to be) hidden somewhere in London. Buy an e-book for £3.99 and maybe you will be the one to decode its clues and find the gold bar’s whereabouts. The book suggests that it may provide suggestions for interesting and little-known places to visit in London even if the competition doesn’t catch your eye. You can pre-order the e-book now; the game goes afoot on December 17th.

Arguably bigger still is the one event where the world’s puzzle hunters focus on the enigma of all enigmas for a single weekend. Teams of handfuls-to-hundreds (well, the biggest teams number more than a hundred) attack the 100-150-ish double-black-diamond-difficulty no-holds-barred puzzles of what will be the 35th annual MIT Mystery Hunt, and this year’s event is set to take place, as tradition dictates, on the weekend starting with the Friday before Martin Luther King day, so the 2015 hunt starts on January 16th. More about this to follow.

Further ahead, for your diary, one of this site’s 2014 highlights was playing in the London leg of the DASH puzzle hunt and writing alllll about it, both before and afterwards. The DASH Facebook page has confirmed that 2015’s date will be May 30th, so there are precisely 26 weeks to go. No cities have yet been announced, but rest assured if a city anywhere in the UK is running a leg then this site will announce it at such great volume that you won’t need to visit the site in order to hear the DASH alarm.

Finally, there will be some fiddling with this site’s servers reasonably imminently. It’s possible that this might cause ghosts of articles half-written in May and June to make a reappearance. Fingers crossed for no poltergeists…