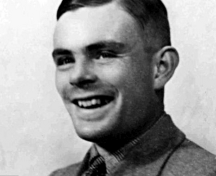 This site previously discussed the National Cipher Challenge, held for teams of full-time students under 18 years of age. Happily, the cryptography season is not just one competition long each year; ever since the University of Manchester’s School of Mathematics celebrated the centenary of the birth of Alan Turing in 2012, each year there has been a cryptography competition for school students. The fourth edition, associated with the year 2015, is under way.

Prizes are available, but only for teams consisting of no more than four participants, none of whom can be in Sixth Form, so the limit is year 11 in England and Wales, S4 in Scotland and year 12 in Northern Ireland. There is provision for non-competitive teams to take part without scoring; here there is no restriction on numbers or ages so teams featuring overage students, teachers, parents or members of the general public outside the education system can take part purely for the fun of it.

“The competition follows the story of two young cipher sleuths, Mike and Ellie, as they get caught up in an adventure to unravel the Carbon Conundrum. Every week or two weeks a new chapter of the story is released, each with a cryptographic puzzle to solve (…) There are six chapters in total (plus an epilogue to conclude the story). Points can be earned by cracking each code and submitting your answer.” The more quickly you crack each code, the more points you win for each of the six chapters. This year’s story hints at a grapheme theme.

Prizes sponsored by Skyscanner (founded by two former computer scientists from the University of Manchester!) are presented to members of the three top-scoring teams overall, but each chapter also awards additional prizes to the first team to solve it correctly and spot prizes to five correctly-solving teams selected at random.

The really interesting thing is that the top prizes are awarded in person at the annual Alan Turing Cryptography Day. “Schoolchildren who had enjoyed taking part in the online competition were invited to spend an afternoon of code-breaking action in the Alan Turing Building. Nearly 200 children (…) enjoyed a wide range of activities including: interacting with Enigma machine apps running on iPads, a talk entitled `Enigma Variations: Alan Turing and the Enigma Machine’, some maths busking, a Q&A session with the competition organisers, as well as a live cryptography challenge which involved schools having to crack three codes in a one-hour period.”

Surely this would be a fantastic opportunity for an exit game (particularly one based in Manchester itself, but really anyone anywhere) to become involved with sponsorship. What would be in it for you? Especially if you can arrange a live challenge, there could be the chance to get the word out to 200 children who have proved themselves not only sufficiently interested in puzzles to enter a cryptography contest but sufficiently talented to do really well at it. On a very slightly cynical note, you might think of this as a way to reach 200 families, or more, who are likely to be right in the middle of your target audience and likely to want to play again and again. Seems like a natural fit!