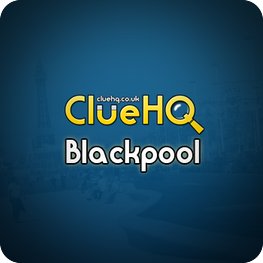 Clue HQ has long been one of the more creative and well-regarded exit games since it opened in Warrington last year. In this site’s interview with proprietor Stuart Rowlands, he hinted at a second location; this has turned from theory into impending practice, surely more quickly than most had expected. You can see a hint to its location in the background of the second site’s logo above, as well as explicit confirmation of this in the text. Blackpool is such a strong tourist destination that it has long seemed to be an excellent fit for whichever exit game turned out to be first to set up there.

The facility will be located some distance from Blackpool’s famous Golden Mile, but it will share premises with the Impact Blackpool entertainment facility, offering an indoor counterpart to the site’s outdoor activities: air rifle shooting, archery, human table football, mini Highland Games, laser tag, paintball and various Segway races. It’s probably not sharing any secrets to suggest that Stuart Rowlands was able to strike up a deal with the site based on having supplied their Segway racing services through his Ride Segway business, so it looks like an intuitively natural match.

The site doesn’t suggest which the first game will be played at the Blackpool location; investigation suggests that a brand new game may be installed there, with potential for a second to follow at the same location; Clue HQ have been known for their originality (as well as their difficulty!) so whatever ends up being installed is likely to be a cracker. There may also be a month or so before the games are available for booking, as well. The prices are set to match those charged in the original Warrington location.

The site is within a short walk of four bus routes, but the site have also arranged a deal with a local taxi company which may work out to be about as cheap for a large party as well as somewhat quicker. The original Warrington site’s How to Find Us page gently requested people not to arrive by hot-air balloon; in Blackpool, all the page says is “ If you plan to arrive by hot air balloon please give us notice before the day of your game“. That would be a way to arrive in style!