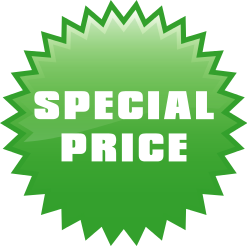 Dealwatch is an occasional feature which, as the name suggests, looks out for special offers that exit games are promoting. The frequency of the feature depends more on the availability of deals than anything else. Some ground rules apply:

As it happens, none of the discounts quoted this time do seem to rely on social buying services, but the principles apply nevertheless.

Mystery Cube of Wimbledon is the most recent new location to open; as is often the case, a location is most likely to offer discounts as, and just after, it opens. Booking using the code Mystery Cube will offer a 50% reduction for teams playing between 24th January, the presumptive opening date, and 7th February. The regular price is also one that might be more likely to be found in the provinces than in London at large.

Another recent opening took place at The Great Escape Game of Sheffield, and they too posted an opening offer to their Facebook page. As described on a linked story at TicketArena, a £20 discount is available for a limited time (though no clear limit is specified, but why wait?) for teams booking using the code GR8TA20.

One more recent opening still happened at The Escape Room of Manchester, who also have a limited-time opening offer with no deadline specified. The site has a total of five different rooms, some that will take teams of sizes two to five, and others that will take teams of up to six. You can get a 20% discount by booking using the code ESCAPE20; another one to take advantage of sooner rather than later.

Lastly, one site that’s not quite such a recent opening is Can You Escape of Edinburgh, though they have already climbed to number seven in the TripAdvisor attractions charts for the city, a list with three sites all now in the top nine. A recent Facebook announcement suggests that student teams who book a slot on a Thursday using the STU-295-ZMV code receive a 20% discount; “just make sure your team bring their student cards”. Facebook suggests this Thursday discount will be running until mid-February; perhaps it’ll last longer, perhaps not – best not wait to find out the hard way!

((Edited to add:)) Another deal that came a day too late but is far too good to ignore: Room Escape Adventures of London have released a Wowcher for their Trapped In A Room With A Zombie show, reducing the price of one of the twelve tickets for each show from £28 plus booking fee to just £14. More about this exciting development soon, hopefully! This deal will only be able until the end of Friday night; vouchers booked in this way can be used until the end of April.

As ever, if you know of other coupons, deals, vouchers or competitions, please send them through. If your site has a offer not listed above, please assume incompetence rather than ill-intent; get in touch and this site will happily spread the good news. (Alternatively, if you would prefer that this site does not list your coupon, or if the details of the offer are mangled, that’s fine too; again, please get in touch.)