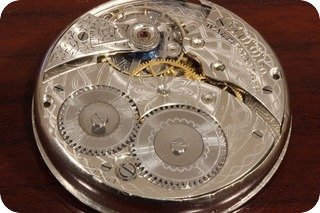 One of Toronto Room Escapes‘ biggest contributions has been his Themed Thursday series, discussing possible exit game themes that haven’t yet been used, or that have been little-used, and how they might be used in the future. It’s been so popular that other blogs have posted their own similar entries in the series, notably one from Liz at Escape Games Review and a string of them from Mark at QMSM.

Perhaps this site will contribute its own at some point, though there’s a long way to go from “here’s a cute thought” and “here’s a fully fleshed-out idea”. Instead, or as well, this site will inaugurate (the not necessarily regular) Mechanics Monday where it looks at individual elements of an exit game that are, more or less, taken as read as established practice, ask “What if…?” and ponder over the possible consequences of playing with the rules.

The general principle of an exit game is go in, solve the puzzles and get out. If you solve sufficiently many puzzles and get out in time, you win; if you don’t solve sufficiently quickly, you don’t get out in time and you don’t win. It’s as pass-fail, win-or-don’t as that. If there is an element of degree or comparison between performances, people compare their teams’ escape times, and a quick escape is to be considered superior to a slow escape. Does it have to be that way, though? Are times even necessarily as meaningful and comparable as they are considered to be? In a certain sort of room with a vast amount of content where the challenge is only partly to work out what to do and partly to get as much of it as possible done, might they enable replay value and give a team a reason to come back and play the same room more than once?

It would be possible to award a score based on puzzles solved, particularly if there are parallel routes to unlocking all the content in a room, on the number of hints taken and on the time taken to solve the puzzles and perform the tasks. (And, surely, other reasons as well, such as the number of players.) Taking this further, one concept is a room where players might have a reason to stay in the room and keep doing things to score as many points as possible, once they have fulfilled all the requirements to qualify to escape the room. (And if players might be deprived of the ability to keep a track of the time remaining once that happens, and just have to keep track of time themselves and risk spending too long before they leave, that might be even funnier.)

It’s interesting to see what might be happening in this regard. This site really enjoyed this excellent interview by Toronto Room Escapes with one of the two principals of Puzzalarium, who do a few unique things, of which this is one of the more distinctive. This site also has a suspicion that at least two UK games are touching on this aspect, to a greater or lesser extent – and, indeed, that is the reason why this is the first topic to be covered on Mechanics Monday.

That said, one pitfall with this issue is the context that scores are only really meaningful in context, perhaps compared to other players’ scores. “Escaped with nine seconds remaining” is immediately understood and pretty universally recognised to be “close”, whereas whether “escaped with three minutes remaining” is close or not depends on the game. Might a score be more inherently understood on a familiar scale – say, as a percentage or a grade? While nobody likes getting a bad grade, nominally offering percentages but in practice everyone scoring between 80% and 98%, or using a scale which started at B+ and went up to, say, A***, would quickly be found to be deceptive. Use the whole of the scale… and just don’t tell the teams who have grades that are less to be proud of what they scored, beyond the usual “you were within two locks!” or “you did it, taking just a minute too long!”, unless they really ask!