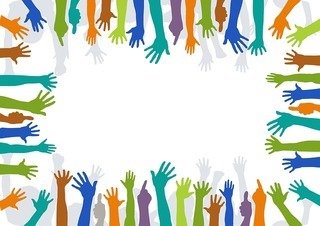 So this photo represents either many hands making light work, or a little-known hundred-player team puzzle. (Perhaps a puzzle where the players are rooted to their various spots but still have to transport items around the room from where they are located to where they are needed?)

There are fewer than a hundred days remaining until the scheduled global date for the seventh DASH puzzle hunt. The same stories, puzzles and (effectively) hunt will be played in locations across the US and also London; the London leg saw eight teams in 2013 and 21 in 2014. This was before Puzzled Pint started to get anything like the traction that it has done in recent months, so it’s hard to know just how big London DASH might get – or, if there is a 25-team limit like last year, how soon it might sell out. A recent post suggests that DASH 7 will be played in at least fourteen locations so far, with a couple of DASH usual suspects (including previously-ever-present Los Angeles) still to check in. Still time for other cities to join the party, including if anyone wants to run one elsewhere in the UK, but the deadline for city registration is March 15th.

Fingers crossed – but no inside information – that the theme of the event gets revealed reasonably soon after that, and team registration starts not much later still. Last year, team registration opened just under two months before the event, so maybe it’s time to think about whether you want to play, and who you might want to play with. Whatever happens, if you’d rather help out than play, the London team will be sure to welcome playtesters and (particularly) on-the-day volunteers; they’ll ask for expressions of interest very soon.

Before then, though, is the UK Open weekend, taking place in person at the Selsdon Park Hotel and Golf Club in East Croydon. This will feature a sudoku championship on Saturday 21st March and a puzzle championship stretching over Saturday 21st and Sunday 22nd March. The UK teams for the 2015 world championships (taking place in Sofia, Bulgaria in October) will be decided in part by performance at these tournaments.

Apparently there are 40 registrations so far, making this the largest UK Open event to date by quite some distance, and strong testament to just how successful the World Championships held by the UK team at the same venue the previous year were. (Over 10% of registrations come from overseas, hence the second part of the title UK Open, representing quite some commitment.) It’s still possible to book, though the block room booking has been made and remaining accommodation is subject to the general availability at the hotel.

They’ve both been spectacular in the past and are both very likely to be tremendous again this year. Pick your favourite, or play them both!