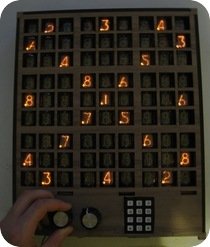 (Image of a fiendishly clever project from Trashbear Labs.)

This isn’t aimed at any particular site or any particular operator, promise, but at the entire genre of rooms that consider themselves historical – or, more specifically, the alternate history that is steampunk.

This site contends that computer screens and LED displays are really not very steampunk and a site might earn itself all sorts of thematic points by avoiding them, as ever-present to the exit game experience as they might be. Technically when so much of at least one interpretation of steampunk is tied up with the clockwork aesthetic, the most satisfying solution would be a great big clock where you can see every single piece of machinery.

However, if you’re going to be playfully anachronistic, a successfully funded Kickstarter campaign is in progress for this Nixie tube clock which looks as steampunk as all get-out. The project recognises that Nixie tubes are 1950s technology and so arguably also not thematic, but they feel much more…. alternate universe.

They’d be rather a luxury item, and possibly a bear for maintenance, as well as just plain small. Maybe this other funded Kickstarter project might be closer to what you’d need in practice, what with bigger tubes and more flexibility. (Hide them behind a great big Fresnel lens to make the images look bigger and even more otherworldly.)

Maybe a single clock isn’t flexible enough. If you want to pass arbitrary hint text to the team, perhaps you could install a great big split-flap display, like the sorts of things you used to get as departure boards at airports and train stations. They were always so spectacular and mesmerising that they would be a very distinctive centrepiece for any game that wants to get away from computer screens.

Ah, for the technical skills and budget…