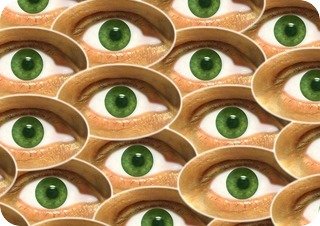 Well, there’s the creepiest image that this site has yet used; it’s as if Argus Panoptes suddenly was badly afflicted with jealousy – and now it becomes clear how Brighton, Newport and Bradford’s local newspapers got their names.

Themed Thursday is a series of posts originated by Toronto Room Escapes, but extended by other blogs, in which underused concepts for exit game rooms are kicked around to see whether they might bear fruit. This instalment was inspired by the thought that there hasn’t really been a reality TV-inspired exit game in the UK (or elsewhere…?) and yet the genre is sufficiently familiar, and with sufficiently many tropes, that people would be able to latch onto the references immediately. It’s also hopefully clear which reality TV show the references concern – the one that probably has got most traction in the UK – while still skirting around trademarks.

The storyline: the team represent a single contestant on an unnamed (but nevertheless very familiar) TV show that is referred to as being In The House. In the pre-story, it is warned that the team are very unpopular with the other housemates and that if even a single housemate nominates them for eviction, then they will be evicted. The team then have (e.g.) one hour to “win the other housemates around”; it turns out that each housemate can be won around in a different way, which effectively involves completing a different series of challenges/puzzles for each housemate.

The setup: around the walls are painted a number of generic housemate images. These bear resemblance to some of the most (in?)famous reality TV contestants of the show in question, or at least the recurring stereotypes. Interacting with them also triggers pre-recorded voice clips, which again bear accent resemblance to, or evoke phrases famously used by, those contestants. Completing the chain of puzzles relating to each housemate will trigger a clip from the housemate suggesting that they won’t nominate you. (It’s also possible that there might be lighting cues to make it clear which housemates have been won over and which are yet to be won over.)

The setting: tropes that could be expected to be referenced might include a diary room, in which a player might interact with an unseen voice (either a recording, or the gamemaster watching from outside), a “hidden room”, probably behind a mirror, because more series have hidden rooms than not these days, a very small bedroom with insufficiently many beds, very, very many cameras, a puzzle that can only be solved by going to the area where there aren’t cameras (thematically, a fictive toilet) and strong Geordie accents.

The denouement: at the end of the hour, or as soon as the last housemate has been won over, there is a set-piece in which lighting effectings highlight each housemate in turn and a voice clip “asks them” who they nominate for eviction. After the question, a voice clip is played of the housemate either nominating another housemate (if they have been won over) or nominating “You” (if they have not been won over). If all the housemates have been won over, then they will each nominate one of the others, which will leave “you” to be the only housemate not nominated for eviction, so you are declared the winner of the game, which is the happy ending. Alternatively, if a housemate nominates “you” for eviction, then the game concludes with the losing decision ending in which you are evicted from the House.

It’s also the case that the referenced show has changed in nature over the years, from what started off as a relatively upmarket, played-straight social experiment (and took several series to go from merely good viewing figures to great ones) and what has become something more of a “watch bad things happen to good people” / “it’s funny because it isn’t you” freak show. It could be possible to reference the unpleasant nature of the challenges, or to theme more strongly on other reality TV shows which award food only for successful completion of aggressive tasks, but that would surely lead to people remembering the game for the wrong reasons…