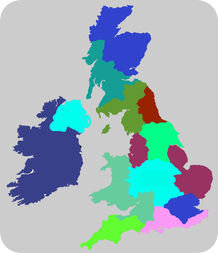 Award yourself some smugness if you can recognise the (admittedly out-of-date, so no need to be pedantic) approximate way in which the countries have been divided above.

Every six months or so, this site looks at a snapshot of the UK market for exit games and analyses where the gaps are at that time. (See the older versions from September 2014 and March 2014.) Six months is practically the duration of a geological era considering how quickly the exit game market moves.

It’s possible that some of the first exit game room proprietors might have started business in the closest big city to where they happened to already live. However, if you had a choice as to where to set up business, where are the most obvious gaps in the market? Alternatively, where might people expect to see exit rooms coming soon? In early 2015, now that some of the most successful operations have started second or even third locations in different towns, where remains up for grabs?

For comparison, the Dublin metro area (where XIT and ESCAP3D are in operation and Escape Dublin is under construction) would come just below number three in the above list.

Six months ago, this pointed to Merseyside, the East Midlands, Tyneside and South Yorkshire as being big gaps that have been filled extremely successfully over time. (Arguably Liverpool going from zero sites to four in the space of about four weeks might be filling the city more quickly than some of the proprietors would like.)

The updated data now points to South Hampshire and Wales as being the biggest gaps in the market at the moment, and Wales is such a popular tourist destination that it’s the place that this site keeps checking and checking to see whether there’s been a launch – but there’s really no evidence in either North Wales or South Wales. This site is convinced that someone could really clean up in Cardiff at the very least, but probably wouldn’t want to run the fourth site to open there.

Other than that, Brighton surely has the feel of somewhere really promising because of the number of tourists it gets and the extent to which it is famous for its creativity (though at least one major global brand lists it as “coming soon”) and there are Home Counties towns that have serious money (Reading and maybe Watford) and/or serious numbers of tourists (Southend) which might well sustain good business from people who don’t want to spend the transport costs to go to central London to play. Further afield, Stoke, Derby, Leicester and even Hull are all surely big enough to support a site each, and there’s evidence to suggest that other relatively small locations can support a “boutique” site which has such an elaborate and enticing game as to draw enthusiasts from further away.

Exciting times, though not without a note of hesitation. With forty-some sites up and running and likely at least another ten or twelve to come, this site would be somewhat more cautious than it would have been even six months ago about new sites’ prospects. That said, there are still very many (probably millions, certainly many hundreds of thousands) people who might only ever play an exit game once who are yet to play their one game, as well as those who might enjoy their first game enough to come back to play more, and those – who this site salutes! – who know the genre’s capability to thrill and devote themselves to seeing all there is to see.