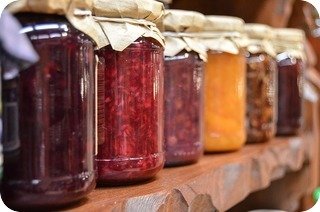 Right behind these lovely-looking jars of jam is a jar of game jam. (Maybe it’s more of a preserve.) Specifically, it’s the Escape Room Game Jam held at MIT, probably the world’s coolest university, in the Boston area this weekend. It’s organised by the MIT Game Lab in affiliation with Red Bull; the link is clearer when it becomes available that teams will be creating escape room content “escape room based around a moment in a upcoming film”, with the film being DxM, the “second project from Red Bull Media House’s recently launched feature film division CineMater“. The boffo Variety magazine calls the film a “high-octane thriller based around the possibilities of quantum mechanics“. Sounds cool, though it’s not possible to measure precisely how cool without changing how cool it is.

This whole Game Jam is really exciting, not least because of the articles it has already generated. One of the co-writers and producer of the film, Joanne Reay, writes that “the next generation of Escape Room will offer a compelling narrative in which an understanding of the story-world delivers an added advantage and insight into the solving of the clues“. Quite possibly so; this site doesn’t believe there is a single future for exit games, but this definitely sounds like part of the future and one that a great many players would surely appreciate in their games. If it’s an aspect that is to be emphasised in this particular Game Jam then the results will be enticing indeed.

Additionally – and this is particularly interesting – Konstantin Mitgutsch, Affiliate Researcher at the MIT Game Lab, writes, advancing the state of the art, on the topic of turning escaping from exit games into a competitive sport. There’s definitely scope for expansion in at least a couple of ways here: first, how might these general principles be applied to other sorts of puzzle-based live adventures; second, how might Escape Room Malaysia’s Escape Run 2014 event compare in practice to the theory? (Are there any other events that might be compared? This site can’t think of any, but you may well know better…) Certainly if you were an operator thinking of running something yourself in the future, there’s the theory to consider.

The speakers at the Game Jam have remarkable sets of qualifications; the same page suggests that the event is set to be filmed. The designs produced are set to be released under a Creative Commons licence; hopefully, the filming will extend to the speakers and their talks will be released as well. If the content released does go on to be used in a pop-up game supporting DxM, then Red Bull will have probably done quite well in terms of getting considerable development expertise at the cost of enabling a single Game Jam – but the Game Jam material’s release will mean that the world at large will have done well from it too, and gratitude should be given to Red Bull and the MIT Game Lab for that.

A couple of other odds and ends outstanding: thank you to everybody who made a submission to the site survey released to celebrate its first birthday. There were more than twice as many responses as there were for the previous such survey (after a hundred posts) and it represents greater commitment to go and fill in a survey on another site, so this does represent progress. Particular thanks to those who offered additional commentary in the text box section, which will not be addressed here, but the responses were very much appreciated.

Finally, this site has captured a second quarterly set of live price data towards producing an estimated exit game inflation rate, and with rather a better idea than it had three months ago about what should be in the basket. Still far too early to attempt to quote a meaningful inflation rate, though, but the general trends based on very few data points are that London launch prices are varying at both the high and low ends compared to prior practice, and provincial launch prices are trending slightly lower.