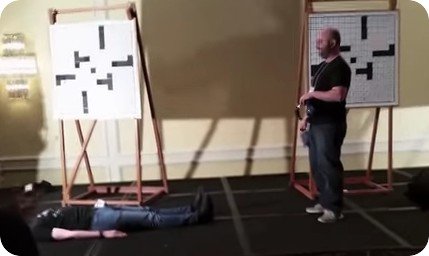 Imagine, if you will, a crossword competition held at the TH_ND_RD_ME from Mad Max where two men may enter but one man must leave strictly positioned across and six feet down. Artistic licence is fun; the truth that led to the above genuine video still is, happily, far more prosaic.

The American Crossword Puzzle Tournament is the foremost competition of its type; a bold claim, made less contentious by a weaselly argument that the prestigious Times Crossword Championship here in the UK is a cryptic crossword competition and thus a slightly different type. Mark Goodliffe, eight-time Times champ and undefeated since 2007, as discussed in this brilliant article, has attended the US event in 2011 and 2013 and won transatlantic cryptic crosswords held there.

The ACPT has been running for nearly forty years; arguably, its high point was the release of the Wordplay film covering the 2005 championship; the attention drew the competition up from habitually drawing nearly 500 contestants to almost 700, though it has fallen back a little to 550 over the years. The 2000s started with four different winners in the millennium’s first five years; since then, Tyler Hinman established a dynasty by winning each year from 2005 to 2009, then Dan Feyer overtook him with a hegemony, winning each year from 2010 to 2014. 2015 would determine “first to six” between the pair, also noting Douglas Hoylman’s six wins over the years and Jon Delfin’s seven. Feyer winning a sixth consecutive event would also be a record.

This year’s event attracted more mainstream attention than usual, not least for its exciting conclusion that led to the photo above. Only a double handful or so of the hundreds of competitors solve all seven main-event puzzles completely correctly, including the legendarily difficult fifth puzzle, and the fastest three of them overall qualify for the overall championship. The second and third fastest suffer a time handicap penalty when solving the championship puzzle, starting this decisive puzzle a few seconds after the fastest solver of the main event. The first person to complete this puzzle, optionally check their answers, then signal their completion wins, if they have solved the puzzle correctly. As it’s a race, deciding whether or not to spend time checking your answers, and how much time to spend checking, is part of the challenge. This year, the video of the crucial three-quarter-second or so between Tyler and Dan finishing – but in what order? – demonstrates quite how big a part of the challenge it is, as shown below:

This year’s event, and its exciting conclusion, have drawn wider attention. Vocabulary.com have the times and more of the context; the awesome FiveThirtyEight have a brilliant longer piece on it as well, with more of the feel of the event and information on how a computer solver has done as a contestant over the years.

Anyone who has won the ACPT so many times is an outstanding solver. However, this site must declare an interest. One of the two blogs about topics including taking part in puzzle hunts and has tweeted about a trip over here featuring a win at Adventure Rooms in Dublin and 2/2 at Lock’d in London. More than enough reason for us to pick a favourite!