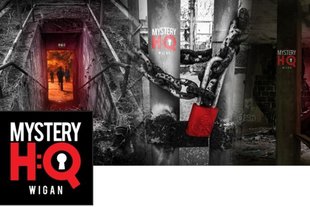 1) The warmest of welcomes to London-focused new exit games weblog The Logic Escapes Me. It’s full of well-written reviews, noting that that is a route that this site has never gone down. It’s not completely clear who the site author is, but this site has a pretty good guess. (Actually, one pretty good guess and two moderately good guesses, with hopes that the two moderately good guesses do start their own weblogs before long.) Highly recommended and a very welcome addition to the blogroll; there are already plenty of cracking exit game (and related topics – in fact, especially when weblogs go on to related topics) around the world, but there’ll always be room for one more.

2) Wigan has no exit games yet, but there’s a crowdfunding campaign under way to launch Mystery HQ Wigan, which would be the town’s first. The campaign also hints at an exciting-looking hunt on the day before the site launches, which strikes this site as an excellent publicity stunt.

It would be fair to say that this site hasn’t yet got too far with its crowdfunding campaign, but it would also be fair to point out the history of UK exit games crowdfunded on Indiegogo; Can You Escape? of Edinburgh are excelling after a moderate crowdfunding campaign, and it’s also a joy to see progress described at the Quest Room Facebook page after their own Indiegogo campaign didn’t really catch traction. Yet if we’re talking about crowdfunded UK exit games, a round of applause to Engima Escape, a winner on Kickstarter, which launched last week, is attracting favourable early comment and still has a 25% discount offer available!

3) It’s not just UK exit games that crowdfund, though; this site is unusually uplifted by this Canadian Kickstarter campaign for In Depth: a Traveling Mental Health Escape Game. What a distinctive and progressive concept! The plan is to build a game that goes on a two-week tour across Canada, and to film a documentary about the experience. Exit Games UK is really excited that people are trying to use exit games as an educational medium in this way, noting Prof. Nicholson’s historical work in this regard, and feels strongly positive about the topic chosen.

“According to the Canadian Mental Health Association, one in five people face the reality of living with mental illness, but less than half will ever seek treatment for it. We seek to craft an escape room that not only challenges and entertains guests, but carries a positive message in a portable package that can be easily assembled and disassembled in a matter of hours. We want the experience of the room to be clear and concise, but not preachy. We seek to create an experience that immerses people in a game that encourages communication, cooperation, and fun.”

The people behind the project also run Ye Olde Dandy’s in Toronto. The area is not short of exit games, so it takes a remarkable additional attraction to make a site stand out, and Ye Olde Dandy’s has one that’s one of a kind: table flipping. Board game fans know that in Soviet Russia, table flips you, but this is literal stress-relief through table-flipping, and it looks rather spectacular and simultaneously very violent without being violent at anyone. Think of it like a punchbag, perhaps. Heck, the fee covers the labour costs of the person setting things up and tidying things up afterwards…

The (Puzzle) Hunting of the Snark