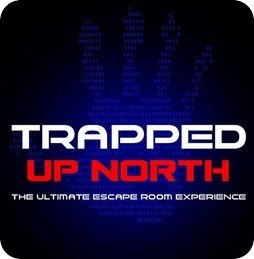 The tendency seems to be that an increasing proportion of new locations are launching at the start of the month so it’s going to be a busy few days and this site is a little behind. One step at a time.

Trapped Up North is a brand new exit game opening tomorrow, Saturday 1st August, with an intial run announced up to and including Wednesday 23rd December. The site is being run at the Great Northern Warehouse in Manchester, a short walk from the Deansgate Metrolink station and Manchester Central (which will always be the G-Mex at heart). Coincidentally, it’s a very similar location to the one where Breakout Manchester‘s two Classified rooms are still running for another week, but there’s no connection; Trapped Up North is run by a different company who will be running a walk-through horror attraction called House of the Dead in October.

Trapped Up North will offer two rooms to begin with and add a third later in the month. All three have 60-minute time limits and are available for teams of three to six, aged 12 and up, though parental discretion is advised for those aged under 15. As is often the case, the site will open six days a week, taking a one-day weekend on Mondays.

The Jigsaw room concerns a grotesque “purity” test of the same name within a makeshift torture chamber in an abandoned mill, set by a serial killer known as The Judge. “If The Judge’s victims were pure, they would pass the test and escape but if they were not, they would die a horrible death at his evil hands. Of all those who took the Jigsaw test, there are no known survivors.” As an exit game, hopefully the survival rate will be at least a little higher.

The Quarantine room has a biological warfare theme. A virus was developed to make enemy forces turn on themselves; this virus has escaped its cryogenic storage and possibly even the compound where it was created. “There is an antidote but it is lost. You are required to enter the contamination zone, locate the antidote and retrieve it so that medical staff and scientists can stop the spread of the deadly virus. If you do not make it within the allocated time, there is a 90% chance that you will have already been infected. In response, you too will be sealed in!”

The Cabin Fever room, launched later in the month, is set on a camping trip that has gone badly, badly wrong. One of your friends has been taken hostage by crazy bloodthirsty locals; worse still, they’re the only driver and have the keys to the car. “Determined to find your friend and after walking for almost a full day you come across a dilapidated cabin buried deep within the swamp. Is this where your friend is being held captive? You watch the cabin for a while and it appears that there is no one there. You must enter the cabin and find out what has happened to your friend and retrieve the car keys to escape. It’s getting dark and you know that the crazies will be hunting soon!”

The attraction was previewed by the Manchester Evening News; a follow-up article has a number of pictures, and a tantalising hint. “Trapped Up North is not the first game of its kind to come to Manchester, but it does have a twist which others in the city don’t. But we are not going to tell you what it is here, that would spoil the surprise.”

Are you made of sufficiently stern stuff to find out what that twist is for yourself? Only three months until Hallowe’en!