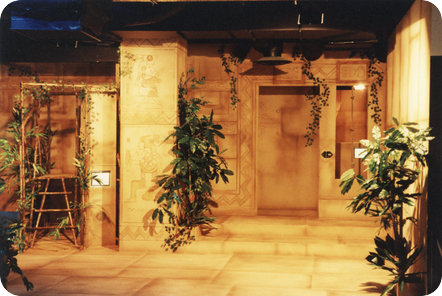 What’s your favourite game of all time? Any sort of game: board game, video game, card game, puzzle game, physical game, computer game, role-playing game, exit game, all sorts of other genres of game, whatever you like; compare your favourites from each medium against each other and pick a favourite. Too hard? You can narrow it down to four.

My four, in no order: puzzle hunts at large, the live action RPG campaign I played in at university, obscure mid-’80s hybrid board/computer game Brian Clough’s Football Fortunes and The Cyberdrome Crystal Maze. You can probably have a reasonable guess, among other things, that I was born in 1975.

This site has touched on the Cyberdrome Crystal Maze in the past without going into the detail it deserves. It was a physical attraction, based upon the The Crystal Maze TV game show, where teams raced from game to game about the centre, sending team members to play bespoke physical games or computer games where physical games would have been impossible. These were often as puzzling as the mental games on the TV show, or at least emulated the demands of one of the show’s physical games. It worked heart-breakingly well. The photo above is of the Aztec zone at the branch in Kuwana, near Nagoya in Japan.

I wrote a longer piece about the game roughly half my lifetime ago, and will probably still have reason to write about it in another twenty years’ time. It’s the one topic that I’ve always wanted to write about on this blog but always shied away from for fear that I could not do it proper justice.

However, failing that, here’s something rather special instead. Some detective work led me to the e-mail address of one Carl Nicholson, one of the founders of the Cyberdrome Crystal Maze – indeed, the technical side of the outfit. Mr. Nicholson extremely kindly agreed to answer some questions by e-mail; even better still, his partner in Cyberdrome, David Owers, whose focus was the business side, contributed some answers as well, and Carl has even got in touch with other members of staff. Huge thanks to all of them for their time, effort and responses, as well as for being the people behind a sensational game; it’s fascinating to hear more of the story behind the scenes.The questions asked by Exit Games (with grateful thanks to Dean for suggestions!) are tagged with EG; the responses are tagged with CN for Carl and DO for David.

Many, many thanks to the team for creating a truly remarkable game and for spending their time and effort in this interview with us. The game still crops up in discussion from time to time and it’s very clear that it wasn’t just me for whom the game had a massive impact. One of a kind; sadly gone, but never to be forgotten.

Who cracked The Crystal Maze?