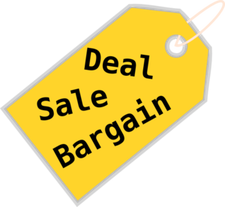 Dealwatch is an occasional feature which, as the name suggests, looks out for special offers that exit games are promoting. (Very occasional; the last time it happened was January.) Some ground rules apply:

Eyes down for a full house with the details:

((Edited to add:)) Exit Games Scotland also point to an offer by Escape Games Scotland of Glasgow: 20% off not only bookings but also gift vouchers until tomorrow. Thank you! Second post in a row with a similar sort of addition… 🙂

Exit games in the media