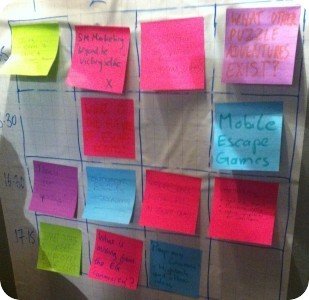 On Thursday, I attended the first unconference in the UK dedicated to exit games and related topics, The Great Escape UK. Being an unconference, the attendees were invited to pitch discussions they wanted to lead, or to have. The board above shows the sessions that were pitched; it’s difficult to read them, so they were as follows:

Slightly over 40 attendees booked places at The Cross Keys in Leeds; not everyone turned up, but there were walk-ins as well, so the final number of attendees is not yet known, but there were representatives from over twenty sites. Particular thanks to those who had come from afar to attend: not just London or Scotland, but all the way from Germany or the Netherlands. We had the private area upstairs, which was very good and an easily adequate size for us; the staff were attentive and extremely polite. (The fish and chips were excellent, coming with a particularly good home-made tartare sauce.)

The day started with an introduction to the unconference format; as an ice-breaker, we were split into five teams, each of which had to solve puzzles to crack a four-digit code to unlock a box. The main meat of the day was the four sessions of discussion; the end of the day was my presentation of the “state of the nation in 2015” and discussion on what might happen next to the community.

In the end, there wasn’t the demand to make every proposed session happen. Generally people would congregate around two or three tables and the discussions might have fifteen or twenty people each, though there were some smaller ones and happily some people found more use from talking to each other, perhaps in continuation of previous discussions rather than attending the sessions at all. The best news is that everybody was constructive, generous with their input and came across really favourably as far as I am concerned. If you were there, you’re straight on my strictly metaphorical “plays well with others” list – not to say that if you weren’t there then you’re on my “doesn’t play well with others” list!

Scribes took notes from each of the talks that took place and notes will surely be collated and published shortly, quite possibly in the same Google Documents format as used at the Ontario unconference so that other recollections will be shared. Certainly I’m interested in seeing what was said at the other sessions I missed, and there were usually two tracks that I wanted to attend in every session. Possibly the most exciting one concerns what is missing from the community; more on that before too long.

My presentation of the state of the nation and the 2015 survey results didn’t get too big a response while I was giving it, so I may need to rethink how I present the data. (People were kindly polite to me about the talk afterwards, but it didn’t feel like I had hit the mark at the time.) I shall publish the data in full within, hopefully, a week or so for you to perform your own analyses.

Lots more arising from the event to come over the weeks and months. A spectacular day; when the book on exit games in the UK is written, today will go down in lore!