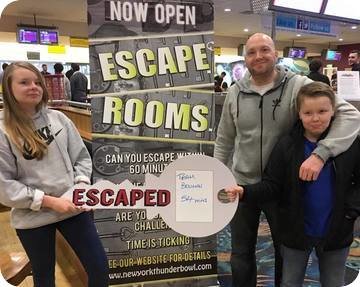 What do you think of when you hear the name Kettering? Here, it brings back memories of Len Martin – the original Final Score results reader from the fifties to the early nineties – saying the name Kettering Town as only he could, for it was always one of the most euphonious team names in the non-league. As for where Kettering actually was… er… East Midlands. Draw a pentagon between Leicester, Peterborough, Cambridge, Northampton and Coventry, and place it so that you can exactly balance it on the point of a pencil and you’ve got Kettering. You probably also have a very strong pencil.

Kettering has a bowling alley rather aggressively called the New York Thunderbowl, with rather aggressive discounts to match. Since February 12th, it also hosts Kettering Escape Rooms. Not long ago, this site discussed exit games within laser game centres; this is the first UK example of an exit game within a bowling alley, which is another step along the way towards exit games being examples of further activities that you might find among more generic family entertainment centres. Many thanks to Ken for pointing this one out.

Kettering Escape Rooms has opened with two one-hour games, each of which caters for rooms of two to six players. In the Diamond Heist room, “You find yourself in a room belonging to a member of a crew involved in a local diamond heist. Can you find his stash of gems and escape before he returns in an hour with his crew?” The Mad Medic room suggests that “A new doctor is in town but a visit to his surgery results in a race against the clock as you realize his methods are more than a little mad! Solve the riddles and escape before you become part of his next experiment!”

Games are available starting between 11am and 9pm daily, or as late as 10:30pm on Fridays and Saturdays. Pairs pay £40, trios £57, fourballs £70, fivesomes £75 and teams of six pay £90. Looking forward to seeing the reviews for this one; there’s no reason why a room within another facility might not have been created, implemented and maintained with as much love, care and attention as a room that stands alone.