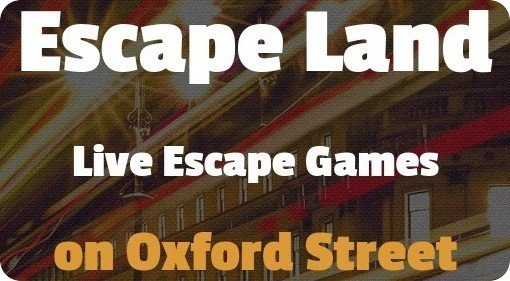 Here’s a first, and a welcome one! This site previewed Escape Land a year and three quarters ago, then sadly bade it farewell last September, in one of the more surprising closures. It was a very pleasant surprise, and about as unexpected as they get, to see a reopening announcement posted to Facebook last week. According to that announcement, and to the site’s booking page, Escape Land opened for business once again today! By analogy, this would be like learning that Andy Kaufman had faked his death decades ago after all.

Sites have relocated in the past, but this feels different because this site had stuck a fork into Escape Land and considered it done. Indeed, it was tempting to wonder whether this might be a completely unconnected game that happened to use the same name… but there’s enough evidence to suggest that it really is a revival. The new location is probably the best address for an exit game yet: 37-39 Oxford Street, London, very near the Tottenham Court Road station on the forthcoming Elizabeth line. (Indeed, within the length of a Class 345 train of the station.) Sure, there are other businesses on the same premises, but that’s still a heck of a prestigious place to be.

Within two and a half weeks of reopening, the site will have two games. You can already play the Professor Oxford’s Experiments game: “Why is Professor Oxford doing secret experiments on his own home? What is he up to? And why is he inviting test subjects to analyse a medicine that is not strictly speaking legal? Based on Escape Land’s original game: Escape from the Age of Steampunk. There are a lot of similarities between these two games, please only book if none of the players in the team has played that room in the past“. That clearly establishes the lineage between the two games – and the game from which it is a development was popular with The Logic Escapes Me, with What’s On UK and with Thinking Bob, so this is very welcome.

Soon to arrive is the Da Vinci’s Exploration room, which is “Based on Da Vinci’s life. This escape game requires players to work as a team to solve hidden puzzles, look for clues and to try to escape in an hour. The room gives to the players the opportunity to use their knowledge, teamwork skills to accomplish a unique escape game“. Both games have 60-minute time limits and are recommended for teams of 3-5, though teams of 2 and 6 may be possible by prior arrangement. The Oxford Street price is £78 for a team of three, £96 for a team of four or £110 for a team of five, which is broadly in line with central London rates.

A game so well-loved that nobody could keep it down makes a welcome return! If you go to try it, then be aware that by cute coincidence, another business with the same address is the Escape to London recruitment company; don’t get the two businesses confused!