As you may be able to tell, I’m struggling at the moment. Service will be resumed at some point. 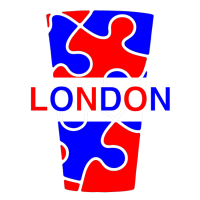 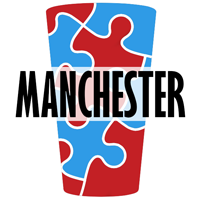 The second Tuesday of every month is always Puzzled Pint day! The Pint has been growing around the world and this month there are set to be thirty meetings around the planet, from New Zealand to Europe to the west coast of North America. For the first time, this includes two meetings in different UK cities; London is well into its third year of Puzzled Pint and now Manchester is diving in. As you can see, London’s shades of red and blue are roundel-inspired, whereas Manchester takes its hues from football colours. There’s no reason why other UK cities couldn’t host their own versions; it just needs someone to take responsibility for doing so.

The simplest way to think of Puzzled Pint is to imagine a pub quiz that you solve with a team of your friends, but replace the quiz questions with puzzles: all sorts of puzzles – word puzzles, picture puzzles, maybe codes, perhaps maths or logic puzzles – and usually very good ones. The atmosphere is deliberately very accessible and hints are freely available, so everyone, from first-timers onwards, can have the fun of surprising themselves by solving puzzles that they thought they would never be able to solve. It’s probably more fun if you come with a group, but if you come alone then the organisers will help you find a team and hopefully make new friends. There’s no charge for taking part!

Take a look at this month’s location puzzle; you’re more likely to overthink it than underthink it, and the style may give you a very exciting sense of the theme for the month. As ever, hints are available; once you’ve got the answer, the London and Manchester locations are revealed. In London, there’s a single giant location, but it’s a good one; you need to submit a response because places are limited – and if you do submit a RSVP and cannot attend, please submit a cancellation so that someone else might use the place that you won’t be taking up. (The Manchester location has no RSVP requirement yet.)

The nominal timing of the event is 7pm to 10pm, but there’s some flexibility – and your team’s timing only starts when you get the puzzles, no matter what time you turn up. Please bring a pair of scissors if you can. 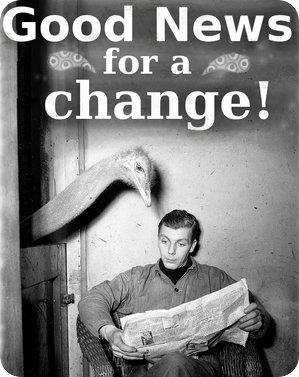 Here are a selection of stories that will hopefully put a smile on your face. Just think about the people involved and the smiles that must have been on their faces! 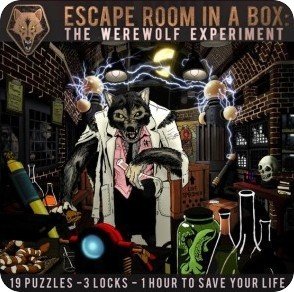 A phrase that I once heard and has got stuck in my mind runs “say it best, say it first, say it last or say it worst”. By cute coincidence, the only citation for it that I can quickly find comes from Professor Scott Nicholson of white paper and Escape Enthusiasts fame. Today’s article is about Escape Room in a Box, the Kickstarter campaign for which closes in less than two days’ time with glorious success; under $20,000 required to fund it, easily over $100,000 raised. Saying it best or first seem impossible now; at least this can be the last place where it gets mentioned… until the next place becomes the new last place.

If you’re reading this, the concept hardly needs explaining. Escape Room in a Box “…is a 60-90 minute cooperative game where 2-6 players solve puzzles, crack codes, and find hidden clues in order to find an antidote to thwart a mad scientist’s plot to turn them into werewolves.” How good could such a game be – or, more to the point, how much could you enjoy such a game? It depends perhaps what aspects of traditional location-specific exit games you most enjoy. Some aspects, like the puzzles, can reasonably be replicated in your own home. Other aspects, like the theming of the environment and ambitious physical props, are much harder. (If a big part of the attraction for you is getting to play with toys that you wouldn’t have the chance to play with elsewhere, it’s less attractive.)

The Logic Escapes Me thought hard about the potential opportunities and limitations of the format and expressed them in their tremendous preview. Perhaps it might best be read in conjunction with Room Escape Artist‘s review of a preview copy of the game, which validates Ken’s concerns and suggests that they have largely been dealt with in a fashion close to reaching the immediate potential of the format. On the other hand, to give full context, perhaps you should compare that review with Esc Room Addict of Canada’s counterpart review of a preview copy, which was rather less enthusiastic.

In any case, the concept appears to have been in the right place at the right time and caught people’s attention more widely; the campaign has been discussed at the Huffington Post and also by those alpha YouTubers at Geek and Sundry. Also excited was Adrian Hon of Six to Start (probably best known for the Zombies, Run! fitness app), also who mentioned it on Twitter. Subsequent discussion started with his opinion “Last escape room I played was $45 *per person*. Surely they could have a higher price/tier, and make the game better or longer?” Perhaps the success of the campaign points to there being the demand for the genre after all – and, from there, it’s tempting to wonder how other members of the family might differ.

Could a later iteration be a partly digital game, requiring its players to supply their own mobile device on which to run an app? Plenty of potential there, starting with being just another medium through which to deliver different sorts of clue, going through being a unique input device and going as far as in any other mixed media game. Certainly the prediction that there may be competitors was proved quickly correct, with ThinkFun introducing Escape the Room: Mystery at the Stargazer’s Manor this month (at a manufacturer’s suggested retail price of US$21.99, so set your expectations to low-tech), set to be distributed in the UK by Paul Lamond from June. That promises to have an online hint system at the very least.

Exit Games UK would be very interested if existing exit game brands were to consider this technique as a brand extension. Suppose someone has come and played your game, had a tremendous time and have left the room in high spirits. Might this be an excellent time to try to sell them a game so they might have related fun at home? It would take a certain sort of set of strengths for the combination to make sense; home games can convey puzzles very well, so this would work particularly well for a site which prided itself not just on its puzzles but also on certain sorts of puzzles which would translate to a home environment. It would also be a good way to advance the story of a persistent game universe, to keep them keen on playing within your universe when it takes so long and so much to introduce another physical game set there. 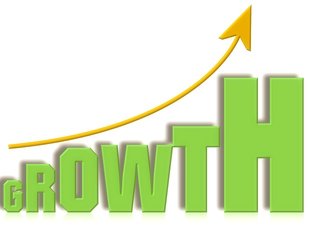 This is the twenty-third instalment of a (just about) monthly feature which acts as a status report on the exit games in the UK and Ireland, hopefully acting as part of the basis of a survey of growth over time. It reflects a snapshot of the market as it was, to the best of this site’s knowledge, at the end of 29th February 2016.

The term opened should be understood to include “sold tickets”, even when it is unclear whether any of those tickets may have been redeemed for played games; the definition of location should be understood to include outdoor locations, pop-up/mobile locations with open-ended time limits and component parts of larger attractions that are played in the same way as conventional exit games. Pop-ups with deliberately very short runs (e.g. Hallowe’en specials, or games run at conventions or festivals) are not counted in this list; games with deliberately finite but longer runs (e.g. Panic!, which awarded a prize to its champion at the end of its sixteen week run) are counted.

This month… well, the numbers get a little bit funky. The number of open games in the UK goes up by nine, but the number of games known to have opened only goes up by eight, because the number of games known to have closed permanently drops by one. The accurate reaction to this would be derision at this site’s concept of “know”, which has proved rather less accurate than suggested; welcome back, Escape Land! Take the distinction between temporary and permanent with an appropriately large dose of salt.

The Report Card does not appear this month because of external time pressures; you may note that there are seven sites which need to be added onto the lists of open games and the timeline, which should hopefully happen within the next week… maybe even before more games start opening, maybe not.

This site takes the view that if you’re interested in review summaries, you probably care (at least to some extent) about the question of which site probably has the best popular reviews. Accordingly, you might be interested in the TripAdvisor’s escape game rankings lists in (picking only cities with multiple exit games listed) Belfast, Blackpool, Birmingham, Brighton, Bristol, Bristol again, Cardiff, Dublin, Edinburgh, Exeter, Glasgow, Inverness, Leeds, Liverpool, London, Manchester, Newcastle, Norwich, Nottingham or Sheffield.

Additionally, TripAdvisor now has pages entitled Top Escape Games in United Kingdom and Top Escape Games in Ireland. No obvious changes to the ranking algorithm from the previous month. The top two sites remain constant; congratulations to the site which remains top of the UK national list for a sixth consecutive month.

You might also be interested in listings at Play Exit Games, a few of which contain ratings and from which rankings might be derived, or ranking lists from other bloggers. Looking at London sites, The Logic Escapes Me has provided recommendations, top five and detailed comparisons, as well as a brilliant brand new comparative ratings table from a handful of critics; see also this piece at Bravofly and thinking bob‘s comparisons. In the North-West, there are the Really Fun room comparisons, the recently-updated Escape Game Addicts rankings and Geek Girl Up North site comparisons as well. If you have your own UK ranking list, please speak up and it shall be included in future months.