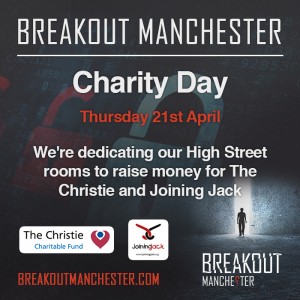 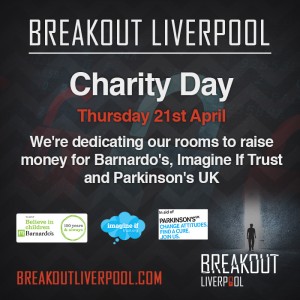 This industry-wide call to arms has kindly been written by Del from Breakout Manchester and Liverpool, to whom questions should be directed (see below for details!) but everybody is welcome to join in. Exit Games UK finds the idea of a focused, cross-site, charity initiative extremely promising and exciting, even if it might take a good chunk of planning ahead to execute to its full potential.

The exit games industry is such an exciting place to be for all involved. Customers love doing something different with their day, they like being challenged, they like feeling accomplished. As the company bringing them that, it is genuinely heart warming to be part of that experience and get to share that buzz with them.

Because of all this excitement around what we do with our various companies, it gives us the opportunity to help people outside of providing them an hour (or hour and a half, as is the case with some of your games out there) of entertainment. I don’t know about other companies, but at Breakout Manchester and Liverpool we are always receiving emails from local charities and fundraisers asking if we can donate a game for a raffle or auction as it’s something different to offer people and drive the interest up. There are obvious parameters we have to set, but on the whole we can agree to these requests and help the people these charities are supporting with their time and often limited resources.

In 2015, Breakout decided that we could do more than provide free games and having donation pots in our reception area. We contacted some local charities and game them our rooms for a day. This altered nothing from our end of the arrangement as these would be running anyway, we just took them off the booking system, told the charities our prices and let them book the slots themselves and take the money we would have received as a direct donation. The sales from any games we sold ourselves got donated to the charities. It wasn’t without its problems, as no first time event ever is, so we addressed these and addressed these and created a charity evening 6 months later, working with only one charity this time in Manchester and several in Liverpool. We’ll continue this biannual charity event, because it’s great to give something back to the communities that support us in whatever way we can.

BUT, for this April, we’re proposing something different. We’ve decided to go NATIONAL.

We want to see if you other exit games in the country want to join us, on Thursday 21st April, in giving some or all of your games to charity with us… We’re working with The Christie (a cancer specialist hospital charity) and Joining Jack (Duchenne Muscular Dystrophy) in Manchester and Imagine If Trust (fighting poverty through education), Barnardo’s (helping vulnerable children and young people) and Parkinson’s UK (supporting and funding better treatments for Parkinson’s), but ultimately this event could benefit any charity of your choosing. The groups we’ve worked with have been so happy about being involved in the event and being able to offer a distinctive product in exchange for donations. They’ve sent us buckets, balloons, T-shirts, stickers for the day and they’ve even come along to be part of the greeting team for customers and give a big thank you to them. The customers are happy as well, as they get all the benefits of playing a game whilst also knowing their money is going somewhere worthwhile.

If you’d like to join us, give us a shout on hello@breakoutmanchester.com, let us know who you’re supporting and definitely let us know of any interesting plans you have and how you get on. Feel free to contact us with any questions as well!

Can’t wait to hear from you and build our community further.
Breakout Team