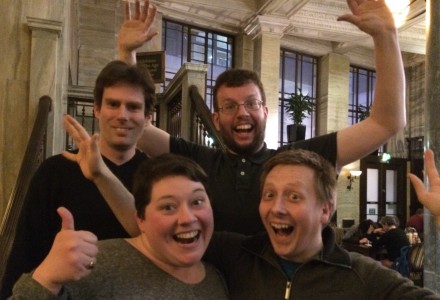 If you couldn’t be at DASH 8, you missed a total treat. The picture above tells a thousand words by showing the reaction of the team I played with at the end of the hunt. The most specific compliment that the hunt deserves was that it was really smooth; the administration in London was spot on, the puzzles were very cleverly designed and the playtesting proved effective, so the overall effect for our middling-performing Expert-track team was that we didn’t encounter any glitches and enjoyed the ride… albeit at more of a trot than at a canter, let alone a gallop. It was clear that a lot of lessons were learned from last year.

Congratulations to Misremembered Apple for being clear winners of the Expert track in London, and to Team Reckless of Escape Review and friends for being clear winners of the Normal track in London. After the hunt finished, it was fun to watch the live ClueKeeper scoreboard, as if it were a Gillette DASH Saturday and Matt le Tissier were shouting “Oh! Soooolve!” as incremental results came in. While not all the results are in yet, provisional returns point to The Judean GNUs and LXP of Palo Alto being the world’s top two; congratulations to them, too. Early leader in the “best team name” contest might just be Quantum of Solvers.

Thank you to all the staff, volunteers and people behind the scenes worldwide; you’ve made a lot of people very, very happy. The event proceeds apace not just as a puzzle championship but also as an increasingly social event, with so many teams familiar from the flourishing Puzzled Pint. The event was so spectacular that the post-event buzz fading left a void; here’s looking forward to the next one!