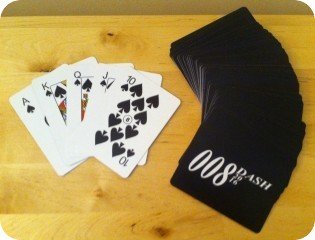 This site makes no apology for writing a considerable quantity about DASH with just as considerable delight; it’s always one of the highlights of the year. If you couldn’t attend this year, here’s what you missed… and perhaps, just perhaps, it might make you interested in taking part in a future year. If you played DASH elsewhere and were keen to know how London interpreted this year’s puzzles, you can find out here as well.

Fair warning: now that DASH has finished, we’re into potential spoiler territory. Every previous DASH has had its puzzles posted online reasonably soon afterwards. If you didn’t play DASH, it would still be a lot of fun to get a group of your friends together and try the puzzles for yourself once they’re made available. This post is going to be fairly generic, avoiding the Aha! moments for each puzzle, but the comments may be more specific. Nevertheless, if you want to avoid spoilers altogether, it may be wise to skip this post and it may be very wise to skip the comments. However, if you played and want to relive the experience, if you played elsewhere and want to compare stories or if you know you’ll never play this year’s puzzles and just want to find out what you missed, then to get to the detail you can click on the mission dossier that is the “Continue Reading” button below.

This year’s title was From Puzzles With Love and the theme was, loosely interpreted, espionage: secret agency, spying – the double-zero motif points to a well-known film franchise with the edges filed off and a very welcome gender subversion. The theme lent itself to an easy-to-follow but intriguing, enjoyable plot; there wasn’t a vast degree of narrative. Last year’s specific theme was a real audience-splitter, generating both strongly positive and (a few) strongly negative reactions; this year’s rather more accessible (if generic) story didn’t risk turning people off in the same way.

As has been the case in recent years, the structure was an unscored icebreaker puzzle that required co-operation and information sharing between teams, a string of intermediate puzzles and a metapuzzle to conclude. This year there were seven intermediate puzzles as in DASH 5, though one fewer than in DASHes 6 and 7. The previous statistics post will be better able to inform you than any verbal description as to how voluminous this year’s puzzle load was. The overall time limit for the hunt was a flat ten hours. We used nine and a half of those ten hours, but we were a very relaxed team, enjoying our locations to the full – four and a quarter hours solving, five and a quarter hours not solving. (This wasn’t the longest dawdle time, even among finishing teams, though it was one of the longer ones; for instance, the San Francisco winners, Black Fedora Group, took 2:20 solving and 5:36 dawdling.) Certainly it felt like an unhurried day and the day was all the better for us as a result, though preferences may vary.

The icebreaker puzzle, GHOST in the Machine, saw teams provided with one of three sets of information and required teams to swap information with other teams so that every team might work from a complete set. The information in question concerned twelve spies from film and TV; each spy was associated with a code letter and a fictive birthdate, and each set of information permitted you associate four spies with their code letters and a different four spies with their fictive birthdates. Swapping information, you could complete the line-ups for the dirty dozen. Each team also had a grid of alphanumeric characters that was suspiciously sized 12×26; sorting by the day of the month and cross-referencing birth month with code letter permitted you to pick out the puzzle answer. Fun, and more entertaining as a gentle warm-up puzzle (after the data-sharing!) than the counterparts from previous years.

In London, this puzzle was hosted in a beautiful Thames-side bar just the other side of the Vauxhall Bridge from the real-life MI6 building. One very minor criticism was that the London hunt started perhaps 30-40 minutes later than advertised – and, marginally worse, there was no attempt to keep teams informed as to when the start time really would be. This is only a tiny speck of a criticism when the London Game Control team did so many things right. As well as the scheduled puzzles from the hunt, there was a completely optional sidetrack of entertainments between puzzles to earn Her Majesty’s Appreciation Tokens; we could fill the time of the delay trying to solve (well, short-cut!) the first of those, which involved identifying missing words from plaques that would be encountered on the day’s route… or could be searched for online!

The scored puzzles, in the order in which they were encountered on the Experienced track in London, were as follows:

A pleasantly full day, and yet not overloaded; so much to admire and for which to be grateful, and so many who deserve all our thanks. It would be possible to go overboard by thanking the puzzle designers, global and local co-ordinators, testers, volunteers and people behind the scenes in every single post, but not to do so here would be unduly mean. Thank you; it was a sensational day!

The London experience was rather more than the sum of its puzzles, though. There were other optional activities along the way – if you could find them! – to win additional Appreciation Tokens. A test of marksmanship with a Nerf gun offered a chance to earn a token; another station asked you to crack a Mastermind code (four pegs to guess, five possible colours) within a reasonably exacting five-guess limit for another token. Apparently there was also another physical puzzle elsewhere along the line, possibly a little like the de Bono L game. The production values through the day were very good; while Puzzled Pint sets the bar ever higher, the deck of cards and assembled cube were excellent souvenirs. Last year’s non-puzzle activities felt a little… awry; this year, the activities in London were excellent palate-cleansers and their optional nature (though the prize for the team earning the most Appreciation Tokens was really pretty nice!) felt like a really wise, player-friendly decision. Excellent practice.

The moan department only really has one criticism for a piece of practice that we loved last year and missed this year: in DASH 7, some puzzle locations gave two identical copies of each puzzle to each team, which didn’t seem to happen this year. (Or perhaps there were limited copies and only teams larger than our foursome received two copies?) In any case, the more copies of a puzzle are distributed, the easier it is to parallelise puzzle solving; please budget the event so that multiple copies can be distributed as standard.

There were other omissions from previous years, but not every innovation has to stand the test of time. The Junior track was a lovely idea, but one which created a lot of extra work for evidently very little demand. Credit for, and confirmation of, partial solutions is solver-friendly practice, though not one which would have been called on frequently in this hunt. (I hope it was a bigger factor in the Normal track, though.) Not distributing token food prizes at the end of the hunt – a bowl of chips per team in DASH 5, a plastic lemon of sweets per team in DASH 6 – is definitely not a loss.

ClueKeeper seemed to work really well this year, and seemed to be most conspicuous by absence of its discussion, the ideal referee that doesn’t draw attention to itself; I get the impression that three years of improved practice has been enough to iron the few remaining issues out – or, alternatively, post-Hunt (not Post Hunt!) discussion might bring the remaining issues to light. Many thanks to Rich Bragg and team for this, in what is presumably one of the biggest stress-tests that the servers get all year. Using ClueKeeper to be able to produce global results with such speed as happens here is a massive, massive advantage.

The ClueKeeper did drain our batteries relatively quickly on iOS but that may be inherently difficult to avoid. (We brought a spare battery for this eventuality, and I don’t think our Android-using team member found this nearly such an issue.) The rate of distribution of free hints was finely and successfully judged; our middling-to-pretty-good (barely top 40%) team stayed ahead of the knowledge dispensed by the free hints on every puzzle except the metapuzzle, which helped us feel good about our progress.

The London locations were easily fine and often notably good. We were fortunate with the weather once again; showers were threatened, but at the slow pace at which we proceeded, only one outdoor puzzle had a few spots of rain, if that. Apparently London is lucky to be able to have so many indoor puzzles at all. The Brit-picking was generally excellent with relatively few cultural references that required investigation; Internet access cannot be guaranteed as wifi access is spotty and pubs – especially basement bars – often inadvertently block radio signals. The Game Control team were tremendous, being friendly throughout a long day; many thanks to you all for giving your time up for us players.

Is it possible that they might be too generous? There is an additional use to par times in setting people’s expectations. A set of par times that were four hours per puzzle across the board would do well at getting people bonus points (and would punish teams who chose to pay to take hints relatively hard, which might or might not be intentional) but would do poorly at giving people an indication of whether the puzzle they were about to face could be expected to be relatively long or relatively short. A set of par times that varied from, say, two hours and twenty minutes to two hours and fifty-five minutes would seem to have all the desirable properties but it would be hard to take them seriously.

What else did this hunt have to admire? Its players inspired more great team names; I’m a big fan of Octopuzzly. Yet perhaps the hunt saved its best for last with the message that came up once the hunt was finished. It seems that there is a global co-ordinator for DASH 9 already! Excellent news; Chris Willmore, this year’s San Francisco co-ordinator, you have a lot to live up to! The message also suggests that the web site might have a hidden puzzle. Perhaps my note that “the logo on the T-shirts (and the other tote bag) hides analogues to morse and braille at the very least” did sell the logo short after all!