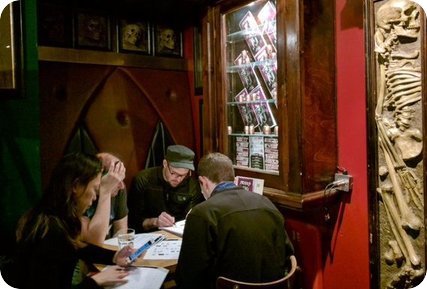 DASH 008 needed its teams to go underground! From @playdashlondon

This is a guest post by David J. Bodycombe, one of the UK’s foremost puzzle authors. You may know his work from The Crystal Maze and Only Connect or perhaps numerous books and periodicals. At the very least you probably know that car park puzzle; to this site’s taste, he’s written easily two thousand much more interesting ones over the years, but you can never tell what’s going to catch the public’s imagination…

Last year, as a participant of DASH 7, something didn’t feel… right. When I got home and had to explain to my wife whatever the heck I’d been doing for the day, I sensed that I hadn’t had that much fun. The company was great, but the frantic time limits, a lack of food, an unfortunate route and a brute of a final puzzle left me thinking “Maybe I won’t do it next year”. But with DASH 8 promising a Brit-friendly theme of James Bond, how could I say no?

Last year, I put down my thoughts on how DASH could improve, both as a podcast and as a summary post in the comments. I make no personal claim for any improvements made but, since it is this site’s frequent milieu, I thought it might be fun to look back and see how much of my wishlist was catered for this year.

(1) DITCH THE TRACKS.
Partially. The Junior track has gone, tailing the tracks from three to two. Frankly, the junior track was never going to be a long-term possibility in London, particularly with its 18+ pub culture being a supplier of many indoor venues. The prospect of expecting a chaperone to guide teenagers around the busy streets of London on a Saturday was a tough ask, and I agreed with a commenter last year who said that there would be better value in making the puzzles available for schools to run their own mini-puzzle drives. I still believe the differences in the Normal/Expert tracks cause more doubt and administration complexity than is worth, and that homogenisation of the tracks wouldn’t affect more than 5% of the teams.

(2) MINI-TASKS SHOULD BE IMPRESSIVE, OR GOOD JOKES, OR OMITTED.
Yes. In past years, it was hard for Londoners not to look on the DASH social media feeds with a feeling of jealousy. Somehow, DASH seemed cooler there – better themed, better spaced and better stunts. Not so, this year. If anything, London may have been *the* place to DASH – particularly with the start point a stone’s throw away from the on-theme MI6 headquarters. Imaginative mini-tasks plus the tremendous innovation of optional ‘HMSAT tests’, some of which required teams to be observant and quick-witted at all times, added immensely to the occasion.

(3) WE NEED TO BELIEVE GAME CONTROL.
and
(4) THE RULES NEED TO BE CONSISTENT FOR EACH LOCATION.
Yes. Last year, the slightly rubber-banded rules, where different locations were allowed to be flexible about when to end the hunt, led to a lot of confusion and disappointment. This particularly applied to my team last year, as we quit early not realising that the advertised “strictly-enforced 8 hour time limit” was actually no such thing. This year, the sensible thing was done – a 10-hour limit was the same for all (AFAIK) and even an overall countdown timer was there on the ClueKeeper to avoid any anxiety.

(5) IMPROVE THE SCORING.
Partially. Still some work to do, here. In particular, the scoring was not explained on an info sheet this year, so lord knows what DASH newbies thought of it. But, again, puzzle 1 was not worth anything. This means that some teams (maybe well-meaning latecomers) are simply typing in the answer that their mates have told them, meaning that ClueKeeper’s stats credit them with solving the puzzle in a world-beating 7 seconds, and thus denying the ‘real’ winning team from getting a little gold cup next to their name. I still think it should be worth something – either a flat score, or a low Par value to indicate that you shouldn’t spend too long on it. Another wish of mine from last year was to allow more opportunities for bonus points. This was indeed achieved, but only in the distinctly cheeky manner of ramping up the total Par time to a little short of 7 hours. Hmm.

(6) MAKE THE PROPS BETTER OR DITCH THEM.
Yes. A big win. You couldn’t say that this year’s DASH was “just Puzzled Pint with walking”. The advantages of DASH’s economies of scale were definitely evident this year and, more to the point, the props had a puzzle purpose to them rather than just delivering a codeword answer.

(7) MAKE THE CONTENT ACHIEVABLE BY MOST.
Yes. Though our team quit on the final puzzle this year due to taking too long on puzzle 9, looking at the general ClueKeeper statistics it’s easy to see that almost all teams had the opportunity to finish within the time allowed.

With these feedback points largely addressed, I offer up another set for discussion:

(A) EASE UP ON THE CONSTRUCTION?
This is one area that really hurts smaller teams. While DASH has never claimed to be any fairer to teams of 3 than 5, nevertheless the fairly extensive nature of some puzzles that required the teams to build paper or wooden models would have added minutes (maybe tens of minutes) to the scores. The news near the end that *every* team member was *required* to have scissors really took me aback. And, I say this slightly seriously, if I ever make it to DASH 38, I wonder how my arthritic fingers would cope with things like folding paper cranes. Does against-the-clock building further discriminate against the less physically able? As other commenters have noted, the time difference in time taken for construction often made the ClueKeeper out-of-sync with the team’s progress.

(B) CHOKE BACK ON THE PUZZLE LENGTHS
Although the average solve times seem much more in line with previous years this time around, and the overall event pacing was better too, there did seem to be an expectation that teams would have to spend 9 hours overall this time rather than 8. I would like to see the par time come back down to nearer 6 hours. This, plus an hour for eating and 90 minutes for travelling, still adds up to a pretty packed 8.5 hours. How could this be done in practice? I would say: by keeping the starter puzzle shorter (it was quite a Googling-heavy brute this year), by keeping most puzzles sub-45 minutes, and by having a slightly more robust attitude to starting on time. Puzzle 5 (par: 75 minutes) was way too long for a lunchtime activity – my usual team usually finishes an entire evening of Puzzled Pint (four puzzles and a meta) within 75 minutes!

(C) TO PREP OR NOT TO PREP?
Despite following DASH on Facebook and Twitter, somehow I missed the “Advanced Training” which gave information on two things: how to solve cryptic crossword clues, and how to fold paper cranes. If you’ve never solved a cryptic crossword, to somehow learn this skill in the week before DASH is asking a lot. What next? You have a week to speak fluent Klingon, or learn to juggle? I’ve seen some people suggest the rules to Baccarat should have been made available beforehand, to which I heartily disagree: it would have put even more advantage to the teams that have spotted the pre-game information.

(D) GIVE SOME INDICATION OF ‘DWELL TIME’
It would be appreciated if the route information could more heavily hint if teams are likely to stay in a location for a long period of time – particularly where locations ‘double up’ for two puzzles. For instance, at the morning meeting point there was a heavy sense of “Do I bother to buy a coffee or not?”. You don’t want to be mid-croissant when ClueKeeper cheerily guides you to your next location 2 miles away. No-one wants that.

(E) BEAR THE BRITS IN MIND…
DASH GC have a little more way to go to make it feel like a global-inclusive event, rather than London being a “+1”. For instance, I winced when – given the event’s British/James Bond theme – we had to release puzzle 1 on ClueKeeper by spelling the word LICENCE the “wrong” way…

Overall, my team rated this year’s DASH as a ‘solid 8/10’ which should be interpreted as a very good score for such a complex event, and a definite improvement from last year. Particular thanks should go to London’s GC who stepped in to help when all others stepped back, and added notable innovations and flair that I hope future GCs will emulate. I very much look forward to DASH 9.

(Full disclosure: due to a family medical emergency, I had to pull out half-way. As a result, some of this post uses feedback from my teammates or other third-hand information.)