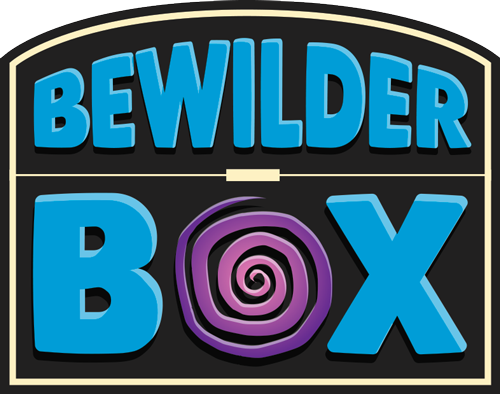 The story behind the latest game to open on the South Coast began back in Budapest when the two founders played one of the famed TRAP games. That gave them the dream of starting an escape room and, after a fairly long gestation period, Bewilder Box was born. In the process they got Hugo Myatt on board, a shrewd move that surely contributed to them breaking this site’s prediction of no crowdfunding campaign (for a new venture) raising more than £5,000. If Hugo Myatt doesn’t ring a bell then perhaps you’ll be aware of the character he played: Treguard, the games master from children’s TV hit program, Knightmare. Today’s announcement that the Crystal Maze is making a (brief, but potentially extendable) return to the UK’s screens later this year is a reminder that late 80s/early 90s kids’ TV nostalgia is a big seller and Bewilder Box undoubtedly saw the opportunity that having a star from that era would offer (and, of course, who wouldn’t want to get someone from Knightmare involved!).

In fact, the game itself has an 80s backdrop with one of the longest backstories that this site has seen for an escape room. They introduce you to Dr Benjamin Wilder Snr, a scientist who devoted his life to the preservation of the human race; his son, Dr Benjamin Wilder Jnr, who is trying to reopen his father’s research; D.A.V.E, a supercomputer that surely has to have some influence from Holly in Red Dwarf and B.R.U.C.E., a research drone designed by Dr B. Wilder Snr. The story centres on an assessment created by the Bewilder Box Initiative, the organisation set up and run by the Drs Wilder.

In the game, “you and your team are new recruits, tasked with completing the Bewilder Box assessment and qualifying for inclusion in the program. Do you have what it takes to answer this unfathomable challenge with a hearty laugh and a self-assured thumbs up? Can you complete the various tasks, challenges and brain tickling puzzles before the time limit expires? Will you uncover the secret of Dr Wilder Sr’s mysterious disappearance all those years ago? You have 60 minutes to find out… Good luck.”

The game opened above the Hobgoblin pub on 19th August and can accommodate up to six players on Thursdays, Fridays, Saturdays and Sundays. Pricing is £95 with a £15 discount for off peak bookings (Thursday/Friday before 6:30pm).

Full disclosure: The author spent a few hours chatting with the Bewilder Box team a few months ago before they launched their campaign and also backed their Kickstarter.

All the news, including the strange case of Brighton