It’s been over a year since I last discussed the growth of the UK and Irish escape room markets so I thought I’d share the current state of play with y’all. As part of maintaining the game list on this site, I track when games open and close and which regions they’re in. That, in turn, allows me to generate graphs showing the growth across the country and individual areas. There’s no promise that the figures are 100% accurate (with new rooms opening up at a rate of around one a day, it’s unlikely to ever be truly up to date), but they are at least pretty close.

With that in mind, here are two charts that show the growth of escape games in the UK and Ireland. Firstly a simple chart of escape room count, plotting their growth since 2012. Second a breakdown of the same data by the standard NUTS regions, charting rooms per million population as a crude way of allowing them to be easily compared. 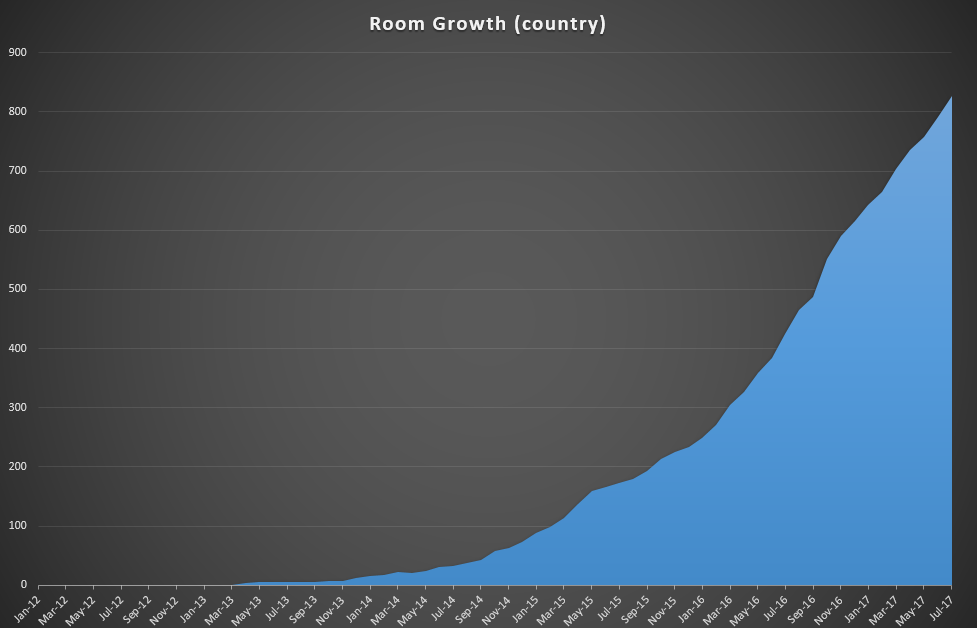 UK and Irish escape room count over the past five years

If you’re not familiar with the term NUTS regions, don’t worry. These are just the standard way of breaking down the countries into separate parts, such as NW England, London and the East Midlands. Within those NUTS regions you can see various trends. Interestingly the North West of England is moving well clear of the pack whereas the rest of the big players seem to be converging to around the same level. Could this mean that the North West is in for a dip? Or does the M62 corridor mean that they’re building up a group of committed enthusiasts – certainly, if you look at bloggers around the country, it’s always been the region with the most interest. 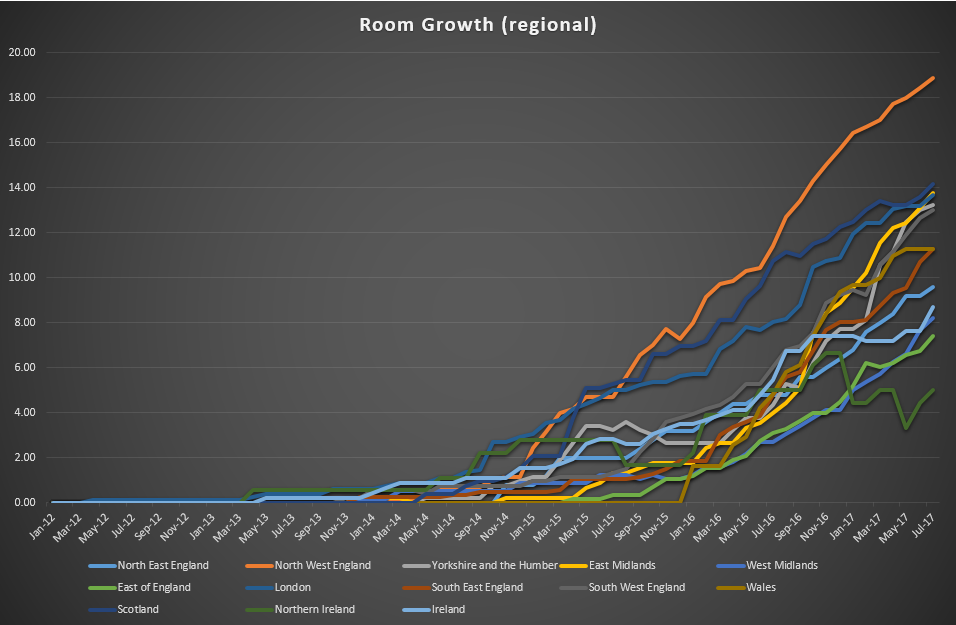 So, back to the original question: How’s the local escape room market doing? Based on the above, I feel that the market is still growing and will continue to do so through the remainder of this year and the whole of 2018.

Last time round, a commenter asked me to estimate the annual turnover of the UK market so I think it’s worth doing that analysis this year. It’s hard to say for sure but… there are currently ~800 rooms in the UK. Those rooms are typically filled at the weekends and evenings only. I’d say, on average, 15 slots a week based on looking through various companies’ bookings. The average cost is probably around £60.  800 rooms * 15 bookings/week * 60 pounds/booking/room * 52 weeks = ~£38,000,000.  So, I’d estimate the industry turning over somewhere in the region of £40m this year.

It’s worth bearing in mind, if you’re an owner feeling like that’s quite a high mark, that there are some big players that skew numbers. I’d be surprised if Time Run and clueQuest don’t each turn over something between £1 and £1.5m per year, while Enigma Quests have booked out around 500 consecutive slots of one of their rooms and I’d estimate already have £100+k of bookings in the next five months.

What do you think? What would you like to know more about? Feel free to add questions or comments below.

Owners: if you’re ever interested in the most recent data then feel free to drop me an email – it’s easy enough to give you up-to-the-minute figures.