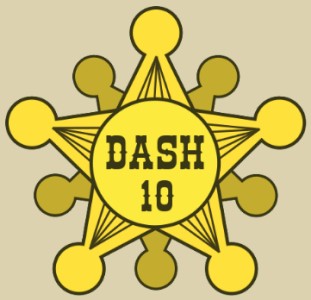 On Saturday, the tenth edition of the DASH puzzle hunt takes place around the world. That’s more literal than usual this year; the event will be played in 23 locations in six countries, smashing previous records of 16 and three respectively, with Australia, Canada and Cyprus are set to join the family and host their first events. Welcome!

Happily for us, London is hosting its sixth edition, and this too is set to be the biggest one yet; all the tickets sold out in under 24 hours – possibly well under 24 hours, for it didn’t seem wise to hang around to find out – and through a piece of heroism from the London Game Control team, there are set to be well over 40 teams in London this year compared to a previous record of two dozen. I very much hope to see you there; please say “Hi!” if you see me.

The current weather forecast for London is for a dry start to the day that is set to get cloudier, with an increased risk of rain, as the day progresses; classic DASH weather. The player’s guide sets the form; there have been repeated suggestions from GC that teams need to brush up on their cryptic crossword clue solving skills, and that scissors and clear tape will prove essential this year. Other than that, it may be worth a browse to see what features have been added to ClueKeeper between last DASH and this one, much as the introduction of Zappar integration between DASH 8 and DASH 9 could have been taken to hint at the mixed-reality nature of the final DASH 9 puzzle. It might also be worth looking out on the morning of the day for tweets from Australian DASH players who will finish their event before the rest of the world starts theirs, though I’m sure nobody will post spoilers.

London GC has suggested that there will be a nine-hour overall time limit for puzzling plus transport. In comparison to previous years, I get the impression that the teamwork icebreaker will see a return this year and that this year will contain more content than last year; perhaps a “fast team” time back to between two-and-a-half and three hours, and a “usual team” time of over five hours. A suggestion that London teams might think about planning lunch between puzzles 5-6 might be interpreted to point to relatively quick puzzles early on and longer ones later in the day. I would expect over 600 teams to play worldwide, perhaps 400 of whom will be on the expert track. The logo with its appropriately ten-pointed star-pair design fits right into the tradition of every DASH logo since DASH 6 having a gold/yellow background, except one!

Misremembered Apple and The Magpie have demonstrated world-class form over the years, rubbing shoulders on the scoreboard with teams who have been extremely close to, or even at, the top in other years. There are other excellent solvers in the UK dotted around a number of other teams. (I am not one of them!) I don’t imagine any teams having members with nearly as much escape room experience as team RecklesS2, if that proves a factor. My favourite London team name is Tactical Yutnori, and I very much hope to find out who is behind a team name that is pure Genius.

As ever, set your expectations for a come-down at the end of the day, once the final meta is over and you have to make your way back from the fictional Old West to the factual West End. Why not stay around for a drink and a chat with your fellow solvers at the end, if you can? Many, many thanks to all the people who have put together the hunt: the global co-ordinators, all those who helped playtest and test-solve and the London volunteers on the day. Really looking forward to what’s very likely to be a fantastic event!