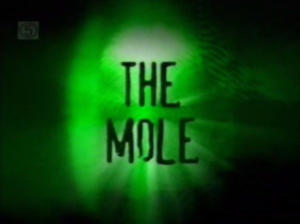 Two posts in one day after a bit of a gap, but this one is very exciting. It’s not clear whether it’s time-sensitive or not, but perhaps best not to hang around in case it is.

In 1999, the game show De Mol was first broadcast in Belgium. It documented the progress of a team of contestants, solving challenges from week to week in order to earn money for the communal prize pot. However, one of the contestants was secretly the titular Mole and had a secret mission to attempt to stop the challenges from succeeding. At the end of each episode, all the contestants would be set a quiz about the identity, appearance and behaviour of the Mole, with the least successful contestant eliminated from the game. The player who won the final quiz won the communal prize pot.

The show has aired in well over a dozen versions around the world. The UK had a version that ran for two series in 1999 and 2000 and was named the greatest UK game show ever in a poll of UK Game Shows readers, so pretty hardcore game show fans; the show has run for fourteen series, and counting, as Wie is de Mol in the Netherlands. Is it a puzzle show? The central puzzle of identifying the show runs through its heart, and some of the challenges can be spectacular puzzles, such as the first one of this episode of the Australian version.

Gareth Briggs has announced that he will be running a one-day interpretation of the show at a central London location, to be later revealed, on at least Saturday 25th October. (Sufficient demand might inspire a second game on Sunday 26th October as well.) There will be some changes to the format; while it remains an elimination game at its core, there’s a considerable difference between an elimination game as part of a TV show and as part of a fun fan game as a day out.

There have been attempts to run The Mole as a fan game in the past, notably those of Erin Sparks, well worth watching. Given that there have been fourteen series of the show in the Netherlands, it seems virtually certain that there will have been fan versions held there as well. Nevertheless, it’s clear that the game only really works when it’s played with full contact; part of the challenge of some games may involve working out how people will react when they are pushed close to their limits. The fact that there’s a stake (albeit a small one) will help, but it may well be that a ready-for-anything, take-no-prisoners attitude is required as to what you might be required to do during the day. Gareth Briggs‘ track record is pretty aggressive – a high compliment – so this may well not be a walk in the park.

There are some people for whom this will be the game of the year; while the show had the play-along aspect of finding the mole, part of the appeal is wondering how you might cope with the challenges. This is a very rare chance to find out whether you can walk the walk as well as talk the talk. Gareth describes this as a prototype game, and has hinted at a possible repeat, but at this point it’s not clear whether it might not just be a glorious one-off. Accordingly, if you’ve ever thought you’d like to give the game a try, or even be the Mole, can you afford to miss this opportunity? No deadline for the application is listed, but best not find out the hard way!