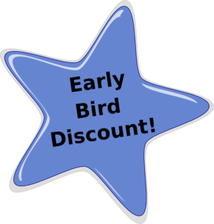 The Dealwatch ground rules have not changed from last time:

Escape Quest of Macclesfield opened for paying guests for the first time today, after a week or so of test games. Accordingly, they have been added to the list of exit games and the Timeline, and their dot has been turned yellow on the map. (The only cloud to gloom this otherwise glorious day is that the mapping provider in use recently turned the map from a Classic Map to a New Map, and this site is Not Happy about it.) In much happier news, the site has posted an opening discount: For bookings made during November use the code ‘Special20’ to get 20% off the price. Sounds good!

Locked In Games of Leeds have a Groupon deal offering chances to play one of their two rooms at £19 for teams of three, £25 for teams of four or £30 for teams of five. This site gets the impression that you’re really going to have to hurry with this one; there may be less than a couple of dozen vouchers still available and there may be less than a day to go for the deal’s time limit even if the vouchers don’t run out. If they have all gone, try the coupon code of lockedinnovember at the checkout stage for a £30/team ticket in November. There are a lot of exit game sites with reasonably similar FAQ sections asking “Is the game scary?” and responding “No”. Locked In Games doesn’t mess around. (That said, it does let 9-year-olds play with adult supervision, so it’s not exactly X-rated.)

Serial dealers The Gr8 Escape of Belfast have another Groupon deal going for their distinctive forthcoming Winter Wonderland Party room, to be available from early January to early March in 2015. For £69.95, up to eight children can try and tackle a 45-minute wintery room escape challenge, complete with a Snow Queen or Ice King theme for the birthday boy or girl. Spread across two rooms, participants have to solve all sorts of puzzles, clues and codes to get out. An additional 45-minute session follows, this time in a themed party area with juice and party game props, tea or coffee for adults, a gift for the birthday boy or girl, and a chance to pick items from the themed candy carriage or cart. This site fully approves of any initiative that means that people from outside the usual exit game age demographic get to play. Princesses Anna and Elsa would doubtless also approve. Understood? Understood.

GR8escape York said two days ago that their thirty voucher codes to play for £30/team had almost gone, so you’re really going to have to rush on that one. Escape Hunt of London’s Challenge is still on and may be the best deal going now that the time-limited 25% coupon promotion has expired. Also in London, Escape Rooms have a VisitLondon10 code for 10% off on weekdays up to 5pm. Puzzlair of Bristol have been getting more good press and their 10%-off HANDBALL code may still be in operation. ((Edited to add: they have announced on Twitter that they have entering the code Twitter on booking will provide a 25% discount until Christmas. Better still!))

As ever, if you know of other coupons, deals, vouchers or competitions, please send them through. If your site has a offer not listed above, please don’t assume the worst; get in touch and this site will happily spread the good news. (Alternatively, if you would prefer that this site does not list your coupon, or if the details of the offer are mangled, that’s fine too; again, please get in touch.)