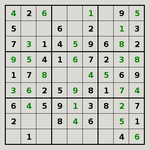 This site has been updating its event calendar to celebrate the New Year. There are a great many puzzle contests and puzzle hunt events to look forward to in 2015, which this site will discuss over the coming days. Exit games have not had events as such to look forward to so far, but perhaps someone will find a convincing way to make an interesting event happen such that it might be featured in this site’s calendar for everyone to get excited about.

The puzzle contest season each year peaks with the World Puzzle Championship and World Sudoku Championship, of which more tomorrow. Only the best can qualify for the national teams there, but the puzzle season at large isn’t restricted to the best solvers. For instance, Logic Masters India offer online contests in puzzles and sudoku each month. However, the World Puzzle Federation started their own annual Grand Prix series competitions for puzzles in 2014 and for sudoku in 2013. This provides a predictable, regular, well-organised global season for all fans.

It’s free to participate; just register at the Grand Prix site. Download the Instruction Booklet and take a look at the types of the 15 puzzles, all to be solved within a 90-minute window of your choice. Each puzzle has a point value, so you can get a feeling for the difficulty; the most difficult puzzles will be well and truly World Championship difficulty, and the lowest-value puzzles will be genuinely relatively accessible. (The difficulty levels may well have been tweaked with the evidence of last season in mind, too!) You don’t need to play all either contests in a series; your best six scores will be counted. The top ten scorers are invited to the World Puzzle and Sudoku Championships to compete for the Grand Prix title in person.

The first sudoku contest features six classic sudoku puzzles as well as examples of nine different sudoku variants: some quite familiar, some very innovative. It’s free, it’s fun, it’s familiar and yet with exciting twists; find a spare 90 minutes over the next day or two and give it a go!