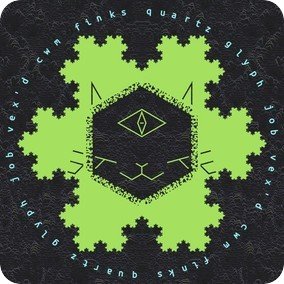 That handsome chap – a stylised cycloptic CuCATS cat at the centre of a Koch snowflake with a cheeky pangram about hir – is the logo of the Cambridge University Computing and Technology Society’s upcoming fourth annual puzzle hunt, set to run in Cambridge (our Cambridge, not the one with MIT and Harvard!) over a period 24 hours or so from 4pm on Friday 12th June. It’s going to be gloriously, unashamedly hardcore. It’s one of the most exciting things that this site has seen this year.

As a FAQ-like page explains, the puzzle hunt is “a team puzzle-solving and treasure-hunting competition. Your team will navigate its way through a mental and sometimes physical obstacle course of challenging and fun computational, mathematical and linguistic puzzles, seeking to cut its way through to the goal before everyone else. No preparation is necessary, just come along on the day!”

One crucial thing to note is that “Teams may be made of up to three members. It is envisaged that most participants will be @cam.ac.uk (affectionately known as Camacuks) and it is encouraged that each team should have at least one Camacuk. However, teams not meeting this criterion may be allowed to compete by prior agreement (drop us an email). If you’re looking for more team members, hit us up and we’ll try to match you up!” It seems very likely that there would be ways for counterpart Oxacuks, Icacuks, Manacuks or even Lifeacuks to play as well, though the hunt will surely have just enough local flavour to keep things interesting.

To get a feel for the flavour of past form, the puzzles from the 2012 edition are online, along with worked solutions. It’s clear that the puzzles are set to challenge their intended audience, with no hesitation about setting the bar quite high. The puzzles from 2013 are also available. It’s striking how both years’ structures point to puzzles that nobody got around to trying, as well as got around to solving.

This site emphasises how accessible Puzzled Pint, DASH and Order of the Octothorpe are; by contrast, this site would only recommend this hunt to the most persistent, capable and (particularly technologically) resourceful – the calibre of which can be found at places including the country’s most celebrated universities. This site does not subscribe to an elitist viewpoint that harder is necessarily better or more interesting; instead, it celebrates a wide puzzle hobby where everybody can find the level of their choice.

However, this site is delighted that there is readier access than once there was to the highest of ceilings, and that those with sufficient skills can get a chance to play at as high a level as this hunt offers; it may be about as challenging as the decades-long tradition of hunts in the US and elsewhere. Those with experience of such games, who have missed having the opportunity to play in them, or those who aspire to reach the highest of global heights, will likely have the time of their lives. Many thanks to everyone at CUCaTS for putting it on and making it available; it’s surely likely to be spectacular!

(Now, does that logo contain some sort of pre-clue around the hexagonal face…?)