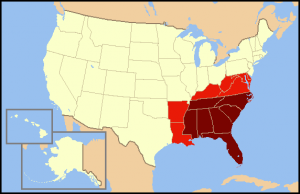 Around The World is an occasional series in which we release the general restriction that this is a site that focuses upon the UK and Ireland.

To untrained eyes, above you have a map of what might look like the south-east of the United States of America. To someone fortunate enough to have married a good woman from the state of Georgia, it’s very much the capital-S South.

Coming up this weekend, in Auburn in the state of Alabama, Eric Harshbarger will be hosting his fourteenth puzzle party, featuring a 16-hour 12-team puzzle hunt on Saturday 12th April – and the first two hours of Sunday 13th! This is the first time he will be permitting remote players; apparently one of the players will be from the UK, though I don’t recognise any names. You might be able to contact Eric to try to participate remotely on a team, particularly if you do recognise a name.

Later, in Atlanta in the state of Georgia, The Game will take place on the afternoon of Saturday 10th May. This team-based hunt, by Out of Hand Theater, sees teams attempt to travel to locations and score points by solving as many puzzles as possible within three hours. One neat twist is that teams solving sufficiently many clues qualify for The Genius Round, where they can attempt to win the grand prize.

Humorist Dave Barry has been organising one-day in-person puzzle hunts for thirty years. From 1984, they were published in Tropic, the Sunday magazine of the Miami Herald newspaper and accordingly known as “the Tropic Hunt”. Tropic magazine closed in 1998, but the Herald restarted the tradition as “the Herald Hunt” in 2001, and most years have seen a hunt since. There wasn’t one in 2013, and no date has been announced in 2014, but since 2008, Barry has organised the Post Hunt, published in the Washington Post, in Washington, DC. A mere five or ten thousand hunters are expected for the next event on Sunday 1st June. Andy Wenzel’s archives are the best place to look for information.

Further afield, Ravenchase Adventures run hunts all over the South. Some of them are walking events entitled “Pubs and Puzzles races”, others are the A.R.K. Hunts where the A.R.K. refers to the Act of Random Kindness that must be paid as the entry fee, and many more. The highlights include the annual Great Virginia Race, whose ninth edition is on the weekend of 24th-25th May, and the third annual Great America Race. This latter event is among the most ambitious of them all; lasting 5-8 days, teams can expect to have a hunt to solve in a different city each day, often with a drive from state to state in between. I loved this travelogue with an account of the 2013 event!

Lastly, for tribal reasons as well as for temporal ones, the University of South Carolina have run their own puzzle hunt in each of the last three years. Puzzles and metapuzzles are released each day, with an intricate system of puzzle answers clueing higher-level puzzles and so on. The event starts in late March each year and the puzzles from the just-finished 2014 edition have been published.