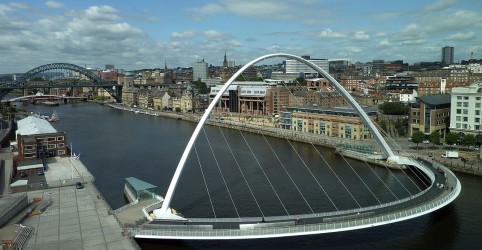 (Photo of the Millennium and Tyne bridges between Gateshead and Newcastle, adapted from a file licensed under Creative Commons; mouseover for specifics.)

This one came as a surprise! It’s well-known that Escape in Edinburgh is doing very well; the TripAdvisor reviews are extremely good and the site has had some days that more or less match up with the busiest London locations in terms of business. On top of that, the owner has started a second location in Glasgow, where the early signs are just as positive, just over a month ago.

Two sites would keep a great number of operators more than busy, but news has arrived that a third is on its way very shortly. Much as Escape were the first to open in Edinburgh and Glasgow, they’ll be the first to open in another big untapped market, with a third location in Newcastle-on-Tyne.

Bookings are not open yet, though this site has reason to believe that they’ll open before too long with games available from mid-October. The site suggests that the first game to open in the Toon will be the Classic Live Escape Game as found in Edinburgh and Glasgow, though it’s not instantly clear how different the Newcastle game will be from the popular versions north of the border. ((Edited to add: A little investigation reveals that the three games share little more than a setting.))

It’s interesting to note that the Newcastle site is based in a Citibase office building (in an excellent location for those coming in by train or on the Metro) as is the case for the Edinburgh site, suggesting that the location has flexibility and room to grow over time. The games offered in Edinburgh have been changed up from time to time and it’s easy to imagine that the ones offered in other sites are likely to vary as well. (For instance, the Glasgow games page mentions a game called “Contagion” coming soon…)

Exciting times! Both the Edinburgh and Glasgow branches had social buying vouchers offered briefly upon opening, so it seems plausible that Newcastle might just do so as well. More news as it arrives.