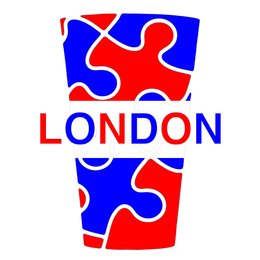 After last month’s play-by-e-mail involuntary experiment, the regular format meetings of Puzzled Pint in London (and in ten other cities, now not just in US but also in Canada!) resumed on the second Tuesday of this month, as every month. This month’s London event was the largest yet in the city, featuring a record 18 teams and 77 players, and was warmly received.

The London location has spawned its own Facebook page and Twitter account, to which the latest information will be posted (full disclosure: often by my wife, who is part of the Game Control team there). Getting 77 extra people to turn up for a few hours on a Tuesday night would be a real boon to some pubs; perhaps other pubs might find it in their interest to hold puzzle events yet. (Or, quite possibly, perhaps the success of Puzzled Pint is something that cannot be caught in a bottle and replicated, and its casual, non-commercial nature is part of its success.)

One interesting, slightly related, event that’s starting up from Sunday night is Quiz The Nation, which will be broadcast on an (admittedly slightly obscure) satellite TV channel weekly at 8pm on Sunday evenings. Get your team together, work out the answers to the questions in real time and submit them in the custom app. Over a hundred pubs have said that they will host gatherings for people who all want to play along, and will presumably have a TV set to the channel rather than Sunday night sport. After each round, the app will notify you of your score and position, both nationally and relative to inhabitants of wherever you’re playing. However, if you don’t have a local pub that’s playing, you can play along at home; if you’re at home and don’t have satellite TV, you may be able to stream the channel from the showcase TV site. (It might be a few seconds behind satellite TV, though, and if speed of response is scored, those seconds might be crucial.)

So far, so standard. Quizzes and their players are fun, but not really this site’s sort of fun. The reason why this site is reporting on this is that the quiz and app come from the team behind The Krypton Factor, and are importing some of that show’s signature mental agility tests into this new venture. This turns it from a straight quiz, with all its attendant downfalls, limitations, flaws and elements of brokenness into something much more puzzly, and thus much more interesting. Perhaps this might be a way to get puzzles – even if not by name – into scores of pubs at once and across the country? Perhaps this might be a way for puzzlers to plunder precious prizes! This site looks forward to finding out.

The next MIT Mystery Hunt starts on Friday 16th at a random 17 minutes after noon Boston time (so 5:17pm UK time, etc.), as counted down by this occasionally acid countdown timer, and plenty of puzzle fans are getting mighty excited about it already, as witnessed by the raging #mysteryhunt hashtag. Some people have made relatively short practice hunts for their teams, and at least one has been made available to the public.

However, with the MIT Mystery Hunt in mind, the craziest thing that this site has enjoyed recently is a couple of rounds of Spaghetti at Eric Berlin’s blog. The MIT Mystery Hunt is known for getting people to make remarkable leaps of logic to find patterns between collections of answers to solve meta-puzzles. Eric Berlin helps people practice this by creating collections of random words and phrases – and everybody’s in on the joke – and inviting people to solve them as if they were answers from which a metapuzzle answer must be extracted. The creativity to make something out of absolutely nothing is remarkable, and that of the second game is even more mind-blowing.

Thankfully this site gets to play with much more sensible puzzles!