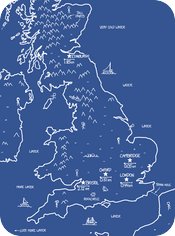 The xkcd comic is licensed under a Creative Commons Attribution-NonCommercial 2.5 License; let’s hope that the author’s blog, from where the map comes, is too.