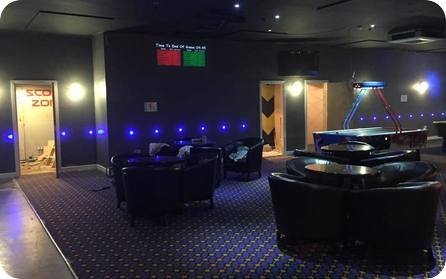 Some exit game owners in the UK remember the laser game bubble of the early 1990s; perhaps a couple of hundred or so laser game centres opened up and down the country, with the vast majority closing within a matter of perhaps two or three years. (Maybe longer, maybe shorter.) Some wonder – and some fear – whether exit games might do the same thing.

Exit Games UK notes major differences between the two in the number of games played per day per centre and the contribution made to a centre’s daily turnover by people who play one game and never play again. (The replayability of the two types of game is rather different, too.) The laser game industry is probably doing better now than even at the height of the bubble then, with many more game equipment manufacturers and with the barrier to entry to getting into the business being much lower now than once it was. While marginal centres come and go, the best laser game centres existed for five, ten or fifteen years, and the best exit game centres should last at least as long as well. Exit games have greater potential for reinventing themselves over time, too, which should only add to their longevity.

Nevertheless, it’s interesting to see some degree of convergence between the two game types. This started in this country when Clue HQ opened a branch at the (itself relatively new) Laser Quest in Sunderland, pictured above; its second game is due to launch soon. A second step is that there is another branch of Laser Quest due to open in Glasgow in March and its own web site suggests that Clue HQ Glasgow is coming soon, too. (This is no secret; it’s acknowledged on, for instance, the Clue HQ Facebook page.) It’s interesting also to note that it doesn’t necessarily have to work this way around; Laser Quest Preston opened very recently, practically sharing space with – and certainly co-promoting with – the branch of The Escape Room in Preston. It’ll be interesting to follow the trend as it develops.. and to see whether the other laser game manufacturers get involved.

Months ago, Ken pointed to this story from Newcastle-under-Lyme, which is very strongly linked with (and practically part of, de facto if not de jure) neighbouring Stoke-on-Trent. The regenerated Lymelight Boulevard shopping centre launched Laser Quest Stoke (told you!) last year, and the aforementioned newspaper article suggested “The laser light gaming centre is due to open next month with Key Quest, an escape room game, expected to follow later in the year.” Accordingly, this site has been looking out for further developments in the area, the Escape Artist Stoke-on-Trent initiative notwithstanding.

The name Key Quest reveals something very interesting, though. The Key Quest Escape Room in North America is an interesting chain where a common thread of the locations’ addresses runs located within Laser Quest. From the web site, “Key Quest is a live action escape room, presented by Laser Quest. Players must use observation and critical thinking skills to find clues, solve a series of puzzles, and ultimately, discover the “key” to escape the room within a set time limit.” Could the branch of Laser Quest at Lymelight Boulevard eventually host the first branch of Key Quest in the UK, analogous to branches of Laser Quest in North America? Might it be that the journalist, or the communication between site owner and journalist, simply misconstrued or misinterpreted the link?

This site doesn’t yet know, but will be keeping an eye on this fascinating development. Watch this space!