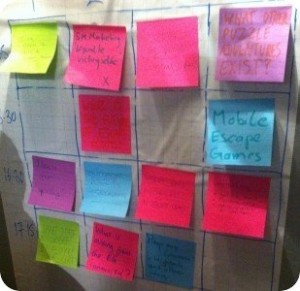 There will be an unconference about exit games and related topics happening in London on the afternoon of Monday 25th April. It’s a sequel to the one in Leeds in January, with further quarterly-ish editions around the country (and maybe beyond, some day?) to follow.

You might have seen the announcement already. This site hasn’t talked about it because only now have the details been absolutely finalised. Some people have registered already only knowing that it’s in central London on Monday 25th April. Those haven’t changed. Other changes have been forced.

The venue has had to be changed. The event now has a basement bar to itself in a lovely pub. (It’s a past Puzzled Pint pub, so it’s easy to vouch for the pub, its staff and its food.)

The time has had to be changed. The event will be happening from 1:30pm to 6:30pm, because the room is only available for certain hours.

The number of places has had to be changed. There is a limit, but it’s rather higher than the limit was in Leeds. (Again, because it’s a past Puzzled Pint pub, it’s clear how many people can fit in in practice, as well as in theory.)

The organisers have had to be changed. The event volunteer team is, well, most of the UK exit game blogging community: Jackie from Exit Games Scotland, Ken from The Logic Escapes Me, Mark from Really Fun and me.

The price has had to be changed…. downwards. A hat will still be passed, and there’ll be a request for a voluntary contribution to pay for the venue and associated costs. What this will be will depend on how many people turn up (if people buy food and/or drinks from our private downstairs bar then this will help considerably) but it’s now possible to put an upper limit of £14 per person on it.

Considering the number of tickets that have gone already, the limited number of tickets may well be reached, in which case there’ll have to be a waiting list. If this sounds like your cup of tea, please register as soon as you can. Site operators and staff are very welcome. People who want to get into the industry are very welcome; there will be few better opportunities to get the chance to pick the brains of many different site operators at the same time. Players who just want the chance to talk all afternoon in good company about these games of ours are also very, very welcome!

The event is on a Monday, mostly because it’s traditionally the quietest day of the week for the industry. Whether you can make it or not, the more general Gamecamp has said that it’ll be running on Saturday 21st May this year, after a year off. That should be spectacular, too!